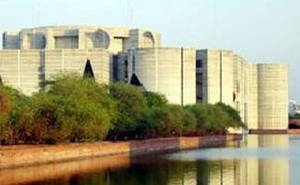 The first session of the 10th Parliament begins Wednesday with no lawmaker from the BNP that has twice been the country's ruling party since democracy returned in the early `90s.It is the first time in more than two decades of democracy that the BNP, founded by late military rule Ziaur Rahman, has no representation in Parliament.Hussein Muhammad Ershad's Jatiya Party has replaced the BNP in Parliament as the main Opposition. Despite much flip-flop, Ershad's party contested the Jan 5 polls and ended up with the second largest number of seats. This is also the first time Bangladesh will see the Leader of the Opposition who is not from either the Awami League or the BNP.The BNP boycotted the 5 Jan polls because the government refused its demand to hold the elections under a neutral non-party caretaker. This is also the first time the Jatiya Party will lead the Opposition in Parliament. It was an ally of the Awami league in the last Parliament. The new Opposition Leader Raushan Ershad is also a woman like her predecessor Khaleda Zia, who heads the BNP. The session begins at 6pm. President Abdul Hamid will preside over the opening session, which will elect the Speaker and the Deputy Speaker. The Parliamentary Party of the Awami League has nominated Shirin Sharmin Chaudhury as Speaker and Fazle Rabbi Miah as Deputy Speaker. There is no hurdle for the two nominees to be elected on Wednesday as no MPs are allowed to vote against the party decision in Parliament. Many think the proceedings of the 10th Parliament will be a bit different as the Jatiya Party will be in the government as well as in the opposition. The Jatiya Party, of course, says they will resort to 'constructive criticism' of the government, despite their presence in the cabinet. The parliamentary party of the Jatiya Party has nominated its MP Tajul Islam Chowdhury as the Opposition Chief Whip. The seat layout for the 10th parliament has been finalised. Five Jatiya Party MPs have been allotted seats in the front row. The Awami League came to power for a straight second term as the BNP and its allies stayed off the Jan 5 polls. The Jamaat-e-Islami, also a regular presence in Parliament since 1991, is totally absent this time. Most of its senior leaders are in jail, facing death or life sentences or tried for war crimes in 1971. Speaking to bdnews24.com, Speaker Shirin Sharmin Chaudhury said, "The Jatiya Party has been given one seat more than what they deserve in the front row." "The seats have been allotted in the front line to those Jatiya Party suggested by the party." The seat allotment was notified on Tuesday. Jatiya Party Chairman Ershad will sit beside his wife and Opposition Leader Raushan Ershad. JP MPs Anisul Islam Mahmud, Ruhul Amin Howlader and AKM Maidul Islam will flank them.Speaker Shirin Sharmin Chaudhury said the Speaker and the Deputy Speaker will be elected at the beginning of the first session of Parliament. After the election, the session will be adjourned. The new Speaker and the new Deputy Speaker will then take oath at the President's office in Parliament. As the Awami League has nominated Chaudhury again for its candidate as the Speaker, Deputy Speaker Shawkat Ali will preside over the session. The new Speaker will then conduct the session. The condolence motion on late Awami League MP Shawkat Momen Shahjahan will be put up in the Parliament. Shahjahan was a member of the 10th Parliament, elected from Tangail. After placing the motion and discussing it, the session will go into a break. President Abdul Hamid will then address the session, which will then be adjourned. Meanwhile, only one bill, the Bangladesh Journalists' Welfare Trust Bill-2014, has been submitted for passage in the 10th Parliament until Tuesday. Over 500 questions have been submitted, seeking replies from the Prime Minister and the ministers. No adjournment motion, however, was put up until 6pm on Monday. The 9th Parliament expired on Jan 24, five years after it came into being. A total of 297 MPs, elected from the 10th Parliament, have so far taken oath. Of them, 231 are from the Awami League, 34 from Ershad's Jatiya Party, six from Workers' Party, five from JaSaD (Inu), two from Tariqat Federartion, 2 from Jatiya Party-JP and one from BNF.