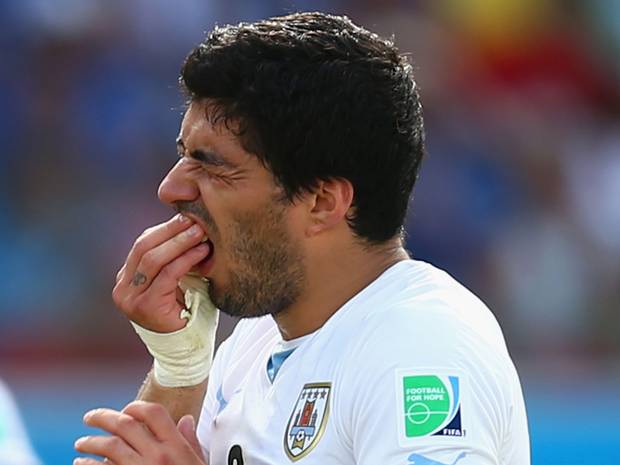 Luis Suarez could face a lengthy ban that would force him to miss the rest of the World Cup if found guilty of biting Italy's Giorgio Chiellini.
Fifa, football's governing body, opened disciplinary proceedings afterUruguay's 1-0 win on Tuesday and has requested television footage.
Chiellini claimed Suarez bit him on the left shoulder, but Suarez said the defender "bumped" into him.
Suarez, 27, could be banned for up to 24 matches or two years.
Fifa said in a statement: "The player has the right to be heard and has until 21:00 BST to submit all documentation.
"The disciplinary committee does not yet have all the elements to discuss the matter. We cannot speak about what could potentially happen. This is in the hands of the disciplinary committee.
"The body pronouncing the sanction decides the scope and duration of it - so we really cannot anticipate what could or could not happen and that's all we can actually say.
"The disciplinary committee understands the urgency of the matter because Uruguay are still in the competition."
Mexican referee Marco Rodriguez took no action following the incident, but Fifa can still punish Suarez.
Radio 5 live's Richard Conway, who is in Brazil to report on the World Cup, said: "Given that spitting at an opponent carries a minimum tariff of six games, you would expect biting to carry a ban in excess of that.
"That gives you the benchmark many people are working on and would mean his World Cup would be over."