Li Na cruises into third round 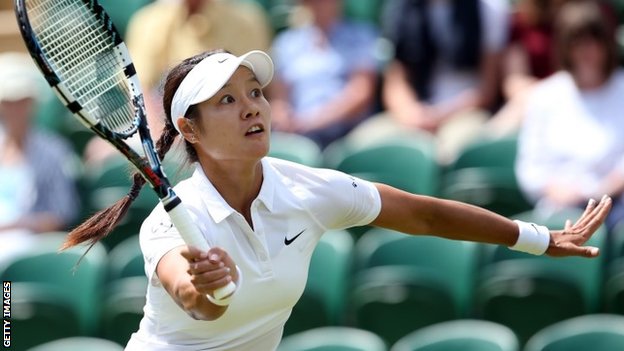 Second seed Li Na reached the third round of Wimbledon after a 6-2 6-2 win over world number 38 Yvonne Meusburger.The Australian Open champion, 32, who lost in the first round of the French Open, was not at her best but was still too good for her Austrian opponent.Five-time champion Venus Williams is also through after beating Japan's Kurumi Nara 7-6 (7-4) 6-1 and will next face sixth seed Petra Kvitova .And fourth seed Agnieszka Radwanska was another straight-sets winner.The Pole, beaten by Serena Williams in the 2012 final, was a comfortable 6-4 6-0 winner over Australian Casey Dellacqua."The first match on Centre Court is exciting. I was nervous but happy to play good tennis," she told BBC Sport. "In the second set I was more confident and used to the grass."Li's next opponent will be Czech Barbora Zahlavova Strycova , who beat 32nd seed Elena Vesnina 6-4 6-2.Williams, seeded 30, is looking forward to facing the 2011 champion, who defeated Germany's Mona Barthel 6-2 6-0 in 55 minutes to reach the last 32."I think we both play a similar game, really go for it and she's one of the kind of players that can get really hot and every time she plays me, she plays really well, so I have to be ready for that," admitted the American, who, at 34, is the oldest woman left in the draw.Kvitova, who had to withdraw from Eastbourne with a hamstring injury, told BBC Sport that the injury was holding up well."I needed some rest before coming here," she said. "Grass is my favourite surface and Wimbledon gives me lots of nice memories and I played a solid game."It will be a tough match against Venus - she is a great champ and likes to play on grass and will be a tough opponent for me."