They are together for first time 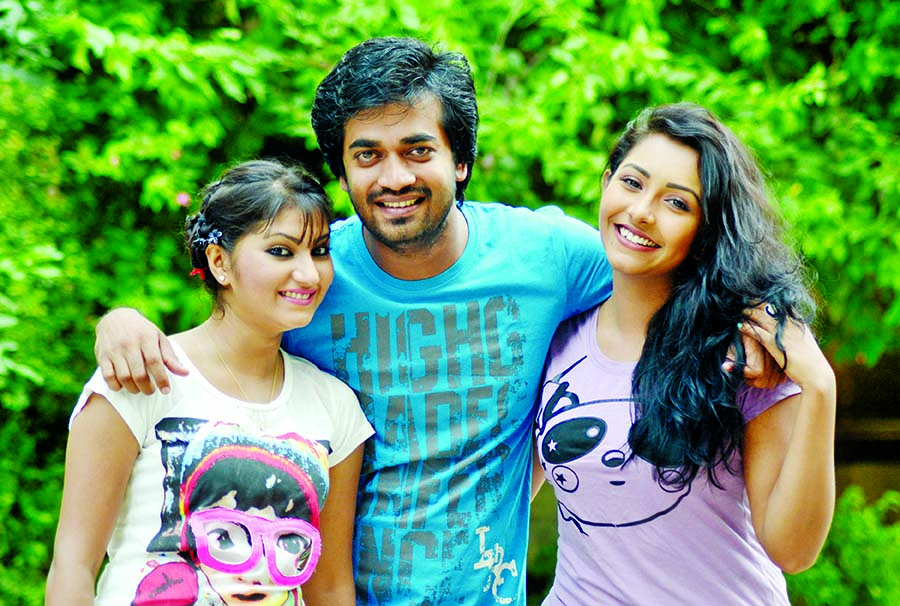 Earlier as pair, Sharmin Zoha Shoshee and
Shyamal Mawla or Prashun Azad and Shyamal Mawla acted together in many TV plays
and telefilms. For the first time, Shoshee,
Shyamal and Prashun acted together in
a common play titled Dur Porobashini. Harun Rashid has written script of the play, while
Mehedi Hasan Tinku has given its direction.
Tanha and Rumpa are two friends. In their
student life, they lived together. Once they left the house where they stayed. In that house,
a young man named Maruf starts to stay their as a tenant. While decorating his room Maruf
gets a passport size photograph of Tanha.
In the meantime, he also gets a phone number on the wall of the room. Climax
begins in the story of the play.
Shoshee acted in role of Tahna, while Prashun acted in role of her friend Rumpa in the play.
Shooting of the play was wrapped up at a
shooting house in the cityâs Uttara area
on Thursday. While talking about the play
Shyamal Mawla told this correspondent,
âI always enjoy to work under the direction of Mehedi Hasan Tinku bhai. He doesnât give not only freedom to the actors while acting but also works very organised way. I have liked
subject of this play.â
Shoshee shared her feelings by this way,
âEarlier I had worked against Shyamal bhai
in six plays. As an actor, he is superb. Though I have introduction to Prashun but for the first time I have worked with her in this play.
She is very cooperative actress.â
âI have really enjoyed working with Shyamal bhai and Shoshee apu in this exceptional story based play,â Prashun said while sharing her
feelings in this regard.
Produced under the banner of Tom Creations the play Dur Porobashini will go on air on Boishakhi TV in Eid-ul-Fitr. It may be mentioned that Shyamal and Shoshee first acted together in Fattah Tanvir directedÂ  a drama serial Metro.
On the other hand, against Prashun Shymala first acted together in Sajjad Sumonâs Shohor-e Notun Balika. After recovering from sickness Shoshee again started acting by this play. Prashun and Shoshee acted and Goutam Koiree directed a play titled Kagoj-er Camera, which is scheduled to be aired during Eid festival. Shaymal has started to work in two drama serials - Aronno Anwarâs Dohon and Alvi Ahmedâs Shunnyo Thekey Shuru.
On the other hand, after Eid-ul-Fitr, Prashun acted two movies - Ochena Hridoy and Yaba Shorbonash are secheduled to be released,
Prashun said. nÂ Â