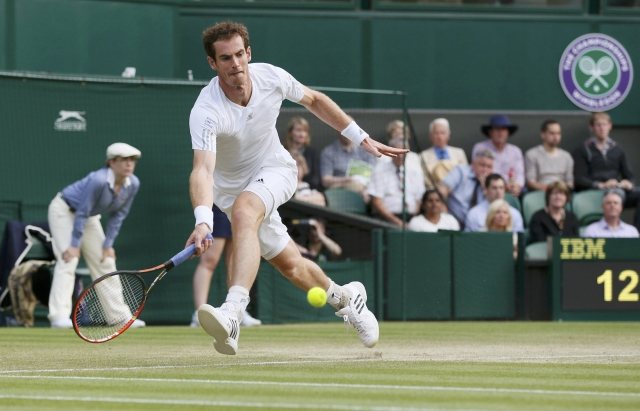 Defending champion Andy Murray swept past Spain's Roberto Bautista Agut on Centre Court to reach the second week of Wimbledon without dropping a set.
The pair had to wait until the early evening before getting under way, but Murray raced to a 6-2 6-3 6-2 win in one hour and 36 minutes.
Murray, 27, heads into round four on a 16-match winning streak at Wimbledon.
He will play 20th seed Kevin Anderson in the last 16 on Monday after the South African beat Fabio Fognini.
At 6ft 8in, Anderson will pose a very different challenge to the three opponents Murray has seen off, with plenty to spare, so far.
Bautista Agut, seeded 27th and ranked 23rd in the world, was expected to provide a sterner test, but Murray raised his level another notch as he dominated with 11 aces and 44 winners.
"There were a lot of close games and it's good to get it done in straight sets," Murray told BBC Sport.
"He's the best opponent I've played so far, and as a step up I felt I responded well. There's a few things I could improve on but it's a good first week.
"I had enough long matches in the French Open to get me physically ready."
Bautista Agut had spoken before the match of how he would not be "scared" of facing the champion on home ground but, after winning the first six points, his game was steadily picked apart.
Murray worked his way into the contest by winning a 27-stroke rally and broke to love after a stunning forehand cross-court pass on the run.
With his serve impressive once again, and Bautista Agut lacking the firepower to keep him at bay, Murray was able to dictate from the baseline and move his opponent around at will.
A second break helped the Scot take the first set in 26 minutes and he drew Bautista Agut into a forehand error to move ahead in the second, before whipping up a cross-court winner to break for the fourth time.
Approaching the hour mark, Murray had racked up 21 winners and won 24 of 25 points on his first serve.