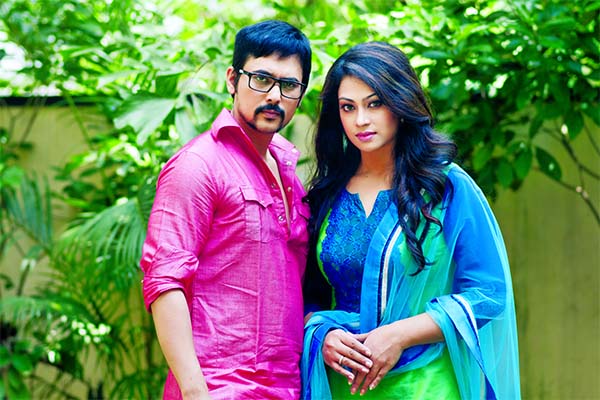 Popular film actress Poppy has already received National Film Award for three times only for giving hard working and also concentrating her works during shooting. During Eid festival Poppy acts in one or two plays and a telefilm each year. For this reason, she always gives priority to story, director and co-artiste while working with them. On the occasion of ensuing Eid-ul-Fitr Poppy worked in a telefilm titled Bhalobasha Nouka under the direction of Biplob Haider. Biplob Haider has also written its script. Super Hero Sohan Khan and newcomer Moniraj were her co-actors in the telefilm.Shooting of this telefilm was taken place at Swapnil-1 and Swapnil-2 in the cityâs Uttara area on June 27 and 28. Due to rainfall all the performers had to take part in shooting till dawn of Saturday. While talking about the shooting of the telefilm its director Biplob Haider told this correspondent, âIt is very necessary to complete shooting of the telefilm. For this reason, I am not giving leisure to the actors.âPoppy shared her feelings by this way, âOften it is listened that actors make sufferings for the producers and directors. It is not correct. I always try to cooperate the directors. In case of this telefilm, I cooperated Biplob. As a director, Biplob is very talented. His working style has attracted me. We should give the opportunity to such type of directors like Biplob. On the other hand, Sohan has come into this position by virtue of his own capability.âHowever Sohan Khan said, âPoppy apu is very sincere actress in her works. If she would not professional actress it became difficult for me to work in the telefilm. She cooperated me a lot.âThe telefilm Bhalobasha Nouka hs been made to air on Ekushey Television in Eid-ul-Fitr.Poppy also informed that on the occasion of coming Eid she could act either in one play or a telefilm.Poppy acted movies titled Char Akshor-er Bhalobasha, Biye Holo Bashor Holona, Dui Beyaier Kirti, Mon Khunjey Bondhon, Shortcut-e Borolok, Poush Mash-er Piriti are waiting to release now. On the other hand, shooting of Sohan acted his debut movie directed by Bapparaz titled Kartooz has already been finished. Therefore, he is also working in Nargis Akhterâs Joiboty Konnyar Mon and Sajjad Rahmanâs Celebrity.Â Â Â Â Â Â