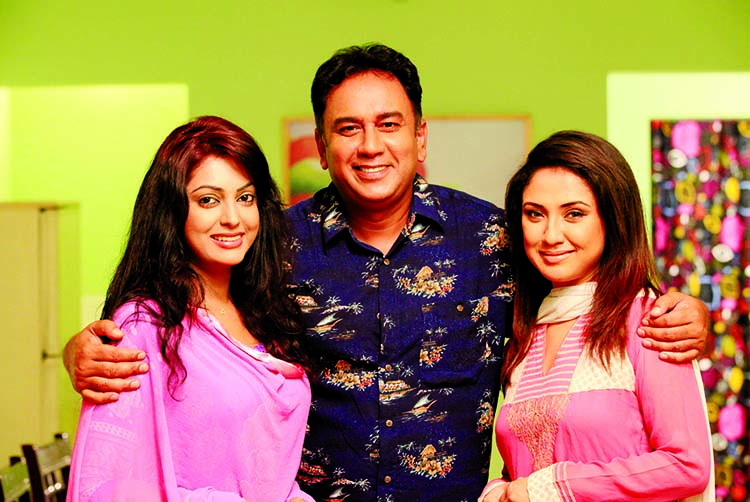 On the occasion of coming Eid-ul-Fitr director Masud Sezan has made a six-episode special Eid serial titled Formal-In for private satellite channel Banglavision recently.
After facing various complexities in the society how a foolish person tries to become a clever man that is the main theme of the story of the Eid serial Formal-In. Director Masud Sezan has written script of the serial himself.
Popular TV actor Zahid Hasan has acted under the direction of Masud Sezan for the first time in this serial. Popular film actress Nipun and once popular actress and model Sonia Hossain also acted with Zahid Hasan in the serial.
By this serial for the first time Zahid Hasan, Nipun and Sonia acted together. Nipun acted in role of Zahid Hasanâs wife, while Sonia Hossain acted in role of Zahidâs sister in Formal-In.
While talking about to perform in the Eid serial Zahid Hasan told this correspondent, âIt is very necessary to be honest person before becoming a good and skilled director. Masud Sezan is that kind of person. For this reason, in a word his works become outstanding. I have enjoyed working with him under his direction. Nipun is a talented actress. It canât be mentioned. It was my first work with Sonia. She has tried her level best while acting in the serial.â
Nipun shared her feelings by this way, âZahid bhai is always very cooperative actor. I had worked against him earlier in three works. Eid serial Formal-In is my fourth work against Zahid bhai.â
âIt was my first experience to work with Nipun and Zahid bhai. I have enjoyed working with them,â Sonia Hossain said.
It may be mentioned that earlier Nipun worked under the direction of Masud Sezan in a drama serial titled Red Signal.
Zahid Hasan and Nipun first worked together in Mohammad Noman directed a play titled Newsman.
Later they worked together in Sagor Jahanâs Biyeta Aamar Khub-e Dorkar and then Zahid Hasan directed Eid play titled Tritiyo Shuvechchha.