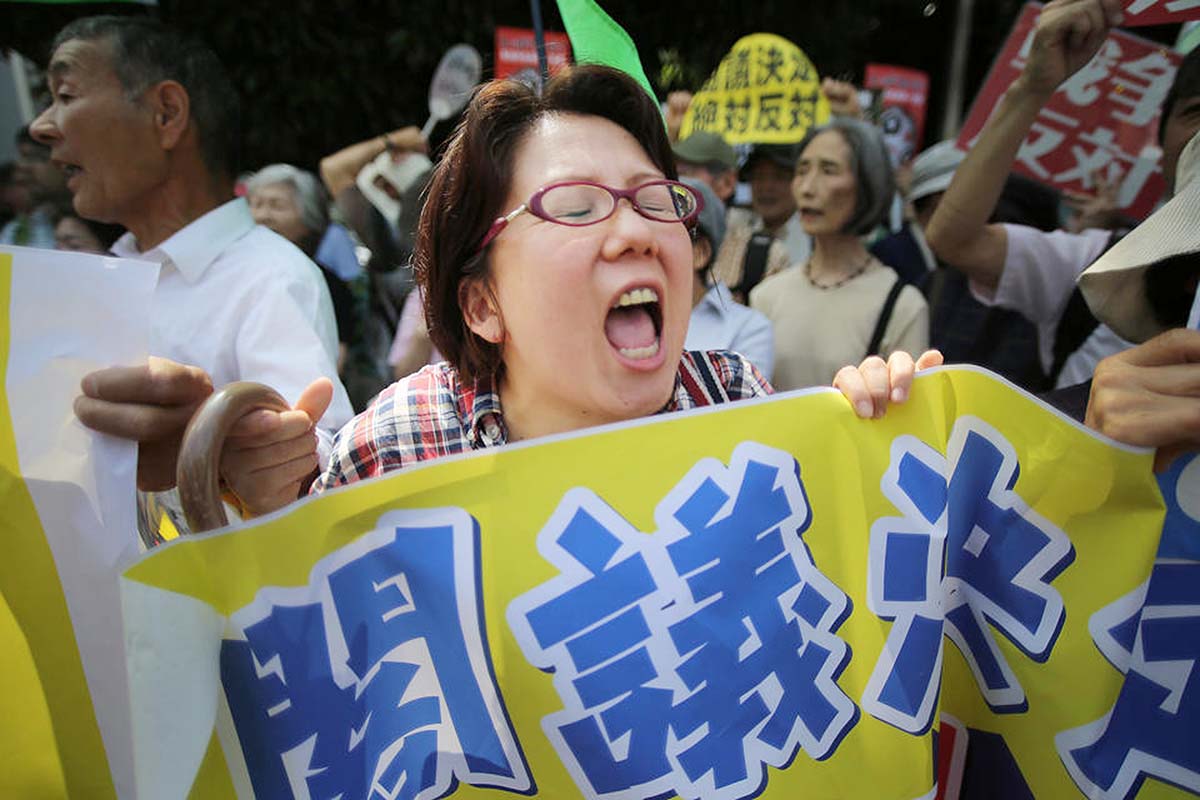 People protest outside the Japanese prime minister\'s office in anticipation his government will reinterpret the constitution to allow Japan\'s military a larger international role in Tokyo on Tuesday.

Japan's cabinet has approved a landmark change in security policy, paving the way for its military to fight overseas.
Under its constitution, Japan is barred from using force to resolve conflicts except in cases of self-defence.
But a reinterpretation of the law will now allow "collective self-defence" - using force to defend allies under attack.
PM Shinzo Abe has been pushing hard for the move, arguing Japan needs to adapt to a changing security environment.
"No matter what the circumstances, I will protect Japanese people's lives and peaceful existence," he told journalists after the change was approved.
The decision must be passed by parliament, which the ruling bloc controls. But by reinterpreting rather than revising the constitution, Abe avoids the need for a public referendum.
The US - with whom Japan has a decades-old security alliance - will welcome the move, but it will anger China, with whom Japan's ties are already very strained.
The decision is also highly controversial in a nation where post-war pacifist identify is firmly entrenched.
On Sunday a man set himself on fire in central Tokyo to protest against the change.
Abe first endorsed the move in May, after a panel of his advisers released a report recommending changes to defence laws.
Japan adopted its pacifist constitution after its surrender in World War Two. Since then, its troops have not engaged in combat, although small numbers have taken part in UN peace-keeping operations.
It has long held the view that under international law, it has the right to collective self-defence, but - until yesterday - said it could not exercise that right because of constitutional limits.
Abe emphasised that the change would not lead to involvement in foreign wars.
"There is a misunderstanding that Japan will be involved in war in an effort to defend a foreign country, but this is out of the question," he told the press conference.
"It will be strictly a defensive measure to defend our people. We will not resort to the use of force in order to defend foreign forces."
On Monday, thousands of people joined a protest in Tokyo to oppose the change.
Critics of Abe fear that this move is the first step to a more permanent revision or removal of the war-renouncing Article 9 of the constitution.
"I thought that if we don't stop the Abe government now then it won't be possible to recover," Etsuo Nakashima, 32, told Reuters news agency.
But others believe that the constitution is a post-war relic imposed on Japan by the US that restricts it from engaging in the normal activities of a modern nation.
China - with whom Japan is currently engaged in a bitter territorial dispute - says it opposes the change, accusing Japan of "remilitarising" under Abe.
Foreign Ministry spokesman Hong Lei said that the new policy "raises doubts about Japan's approach to peaceful development", and accused Japan of "hyping the China threat".