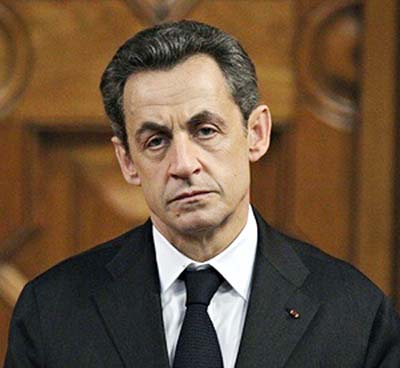 French ex-President Nicolas Sarkozy has been detained for questioning over alleged influence peddling.Sarkozy is being held at Nanterre, near Paris, in an unprecedented step against a former president.Sarkozy's lawyer was questioned on Monday on suspicion of seeking inside information about a case against the former leader.The latest developments are seen as a blow to Sarkozy's attempts to challenge for the presidency in 2017.Investigators are trying to find out whether Sarkozy, 59, who was president from 2007 to 2012, had promised a prestigious role in Monaco to a high-ranking judge, Gilbert Azibert, in exchange for information about an investigation into alleged illegal campaign funding.They are looking into claims that Sarkozy was warned his phone was being bugged as part of the funding probe.Azibert, one of the most senior judges at the court of appeal, was called in for questioning on Monday. Another judge, Patrick Sassoust, was also questioned, as was Sarkozy's lawyer Thierry Herzog.The drip-drip of allegations about Sarkozy, money-raising and misuse of influence, continue to disrupt his much-touted return to frontline politics. Over the past two years the French have become used to regular stories in the press raising awkward questions about their former president's ethics.Worried by the prying of investigators into claims of illegal party fund-raising, it is alleged that Sarkozy used a judge as point-man in the High Court of Appeal to tell him how proceedings against him were progressing. More serious is whether this judge tried to influence decisions in Sarkozy's favour.Sarkozy's supporters accuse the investigators of themselves being politically influenced - by the ruling left. How come, they ask, that every time Sarkozy makes a move back towards political life, the media are fed a new twist in the investigations? One side says it is dogged police work. The other says it is harassment.This is thought to be the first time a French former head of state has been held in police custody.His predecessor, Jacques Chirac, was given a suspended prison sentence in 2011 for embezzlement and breach of trust while he was mayor of Paris.Investigators will be able to hold Sarkozy for an initial period of 24 hours but can extend custody for another day.Government spokesman Stephane Le Foll denied any political pressure had been placed on the judicial system to prosecute Sarkozy."The justice system is investigating and will follow this through to the end. Nicolas Sarkozy can face justice just like anyone else," Le Foll said.Sarkozy's allies rallied to support him.Mayor of Nice, Christian Estrosi, tweeted: "Never has any former president been the victim of such treatment, such an outburst of hatred."An investigation was launched in February into whether Sarkozy had sought inside information about the inquiry into his 2007 election campaign funding.It has been claimed that late Libyan leader Muammar Gaddafi helped fund the campaign.It is alleged that Sarkozy was kept informed of proceedings against him while a decision was made over whether his work diaries - seized as part of the funding inquiry - should be kept in the hands of the justice system.The Court of Cassation ruled in March 2014 that the diaries should not be returned.Investigators believe the former president was tipped off that his phone was being bugged as part of the inquiry.Sarkozy insists the allegations against him are politically motivated.But the BBC's Hugh Schofield in Paris says it is clear they represent another obstacle in the way of his planned return to frontline French politics.The former president is seeking to regain the leadership of the centre-right UMP party later this year.