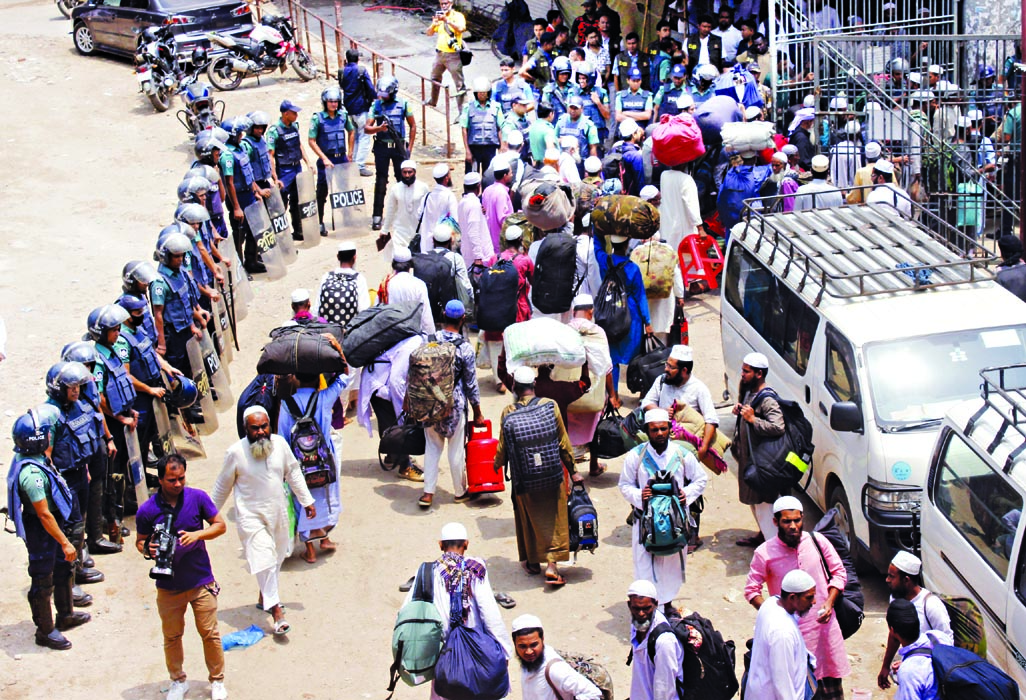 A scuffle took place between the followers of Indian Tabligh Jamaat leader Maulana Saad and their rivals in city\'s Kakrail Mosque on Saturday. Photo shows police being deployed around the area to quell the violence.

Two factions of the Tabligh Jamaat have clashed over an previous conflict at Dhaka's Kakrail Mosque-the headquarters of the religious group's Bangladesh chapter.
The conflict resurfaced on Saturday morning between them as they gathered at the mosque to attend a meeting.
Police rushed to the spot, calmed the feuding factions and urged the leaders of both factions to leave the area for security reasons, said DMP Deputy Commissioner Maruf Hossain Sardar of Ramna Zone.
The conflict between the two factions continued from the last Tabligh Jamaat's annual event Biswa Ijtema, the largest Muslim congregation after the hajj.
The conflict originally stemmed from the controversial appointment of Saad Kandhalvi as the chief of its Delhi-based Supreme Council. A group of Tabligh Jamaat members protesting the arrival of Central Sura member Maulana Mohammad Saad Kandalavi in Dhaka brings the traffic at the airport road to a halt on Wednesday.
"The tension has been running high between the two factions since morning. Later, police brought the situation under control," said Maruf.
Kandhalvi, earlier announced himself as the chief of the body, which created a rift among the senior members of the Tabligh Jamaat's Bangladesh chapter. Because of the conflict, he had to leave Bangladesh without attending the last ijtema. Earlier this year, a scuffle broke out between the two groups on the premises of the mosque. Home Minister Asaduzzaman Khan mediated between the two factions.
Against this backdrop, the two factions again ended up in the conflict over a meeting on the day.
Akram Hossain, a follower of Saad, said: "We were barred from attending the meeting and a scuffle started when we protested it. Later, police came and asked us to leave the area."
He claimed that students of Qawmi madrasa were the obstructers.
In an effort to avoid such untoward incidents in future, a five-member advisory council was formed by the 'senior leaders'. The council's member Abdul Quddus, who serves as the acting secretary general of Qawmi Madrasa Education Board, told bdnews24.com: "I am out of Dhaka now. We are trying to solve the problem by ourselves." Tabligh Jamaat is the largest organisation of Sunni Muslims in the Indian subcontinent. Its headquarters, referred to as the Markaz, is based in New Delhi. Its operations are conducted through 13-member central council.