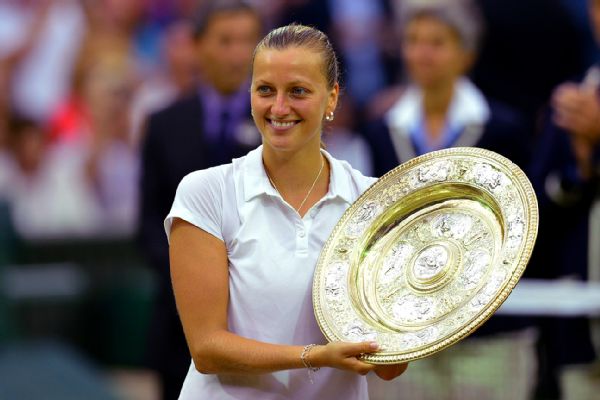 Petra Kvitova of the Czech Republic holds the trophy after winning the women\'s singles final against Eugenie Bouchard of Canada at the All England Lawn Tennis Championships in Wimbledon, London on Saturday.

Petra Kvitova swept past Canada's Eugenie Bouchard with a stunning performance of controlled power to win her second Wimbledon title.
The Czech sixth seed reclaimed the title she first won in 2011 with a 6-3 6-0 victory in 55 minutes.
It is the 24-year-old's second major title and will see her move up to fourth in the world rankings.
Bouchard, 20, had made history by becoming the first Canadian to reach a Grand Slam final.
She had won junior Wimbledon just two years ago and was one win from taking the senior title in only her sixth Grand Slam tournament, but came up against a player in remarkable form.
The only thing that might have troubled a rampant Kvitova was the weather, but early rain cleared and the roof was opened long enough for the final before being brought across for the trophy presentation.
With compatriots and former champions Martina Navratilova and Jana Novotna watching from the Royal Box, Kvitova said: "To be back here with the trophy is so special.
"I have to say thank to everyone who supports me all the time, it is a special time for me.
"Hopefully it will be good for everyone in the Czech Republic to have a second trophy. It is my second title so I hope it will be a little bit easier for me to handle."
The match had been billed by some as a contest between the Kvitova serve and the Bouchard return, with the Czech leading the aces charts and the Canadian on top of the standings for first-serve returns.
In the event, it was Kvitova's searing returns that made the difference as she broke serve six times and hit 28 winners, leaving Bouchard's major final debut to disappear in a blur.
A huge forehand winner brought the Czech a first break in game three, and when she then came through a testing service game with a stunning backhand from out wide, her support team in the stands were on their feet.
Bouchard saw off three more break points in game five but could not withstand the pressure at 4-2, with Kvitova getting on top of a high floating ball and crushing a forehand down the line.
Kvitova has struggled with consistency throughout her career, often unable to build on promising starts, and a few alarm bells might have been ringing when she failed to serve out the set.
It was nothing more than a blip, however, as the Czech resumed her demolition of the Bouchard serve to break again, and surged away in the second set.
Three more breaks and just three points dropped on serve saw her race through it in 23 minutes, and a chastening afternoon for Bouchard ended when Kvitova hammered another backhand winner before falling back onto the turf in celebration.