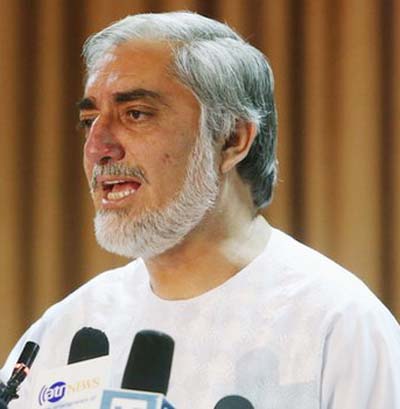 Afghan presidential contender Abdullah Abdullah has claimed victory in last month's poll, despite results giving a lead to his rival, Ashraf Ghani.
Addressing supporters in Kabul, Abdullah repeated claims that the election process was marred by fraud.
US Secretary of State John Kerry had earlier warned against a power grab, amid reports that Abdullah was planning a "parallel government".
Meanwhile, a bomb near Kabul has killed 16 people, including four Nato troops.
Ten civilians and two police officers were also reportedly killed in the attack on a clinic near Bagram, home to the largest US base in the country.
I am at the hall where Abdullah Abdullah has been speaking. People here are angry: a crowd chanting in rage has torn down a poster of President Hamid Karzai, chanting, "Death to Karzai. Long live Abdullah".
They are appalled at the election results. They believe that massive fraud has happened while President Karzai, the election commission and Ashraf Ghani stood by.
So the Abdullah camp have decided to take things into their own hands and he appears to have some support. In the past 24 hours, several influential figures - governors, district leaders, mayors, and warlords - have come out in his favour. But Afghanistan is a divided country - Ghani and Abdullah both command a lot of support.
Analysts will be very worried. They know that what has been suggested - a parallel government - could affect Afghanistan's stability, economy, security and its relations with the international community.
The army across the country is such a divided force that it is difficult to know how it might respond. Everybody recognises this has the making of an electoral crisis.
Abdullah told the gathering in Kabul that he would never "accept a fraudulent government".
"We are the winners of this round of elections, without any doubt," he said, to cheers from the crowd.
However, he stopped short of declaring a parallel government as his supporters had earlier suggested he might. Instead, he called for a unified country.
"We don't want civil war, we don't want a crisis," he said. "We want stability, national unity, not division."
Preliminary results announced on Monday gave Ghani 56.44% of votes in the 14 June run-off.
Abdullah, who fell just short of an outright majority in the first round, had 43.56%.
Both men have alleged fraud in the election. Votes are being re-checked at nearly a third of polling stations - more than 7,000.
Correspondents say recounts could significantly alter the final result, due on 22 July.
Earlier on Tuesday, Kerry said Afghanistan risked losing security and aid support if anyone tried to "take power by extra-legal means".
He is expected to travel to Afghanistan on Friday.