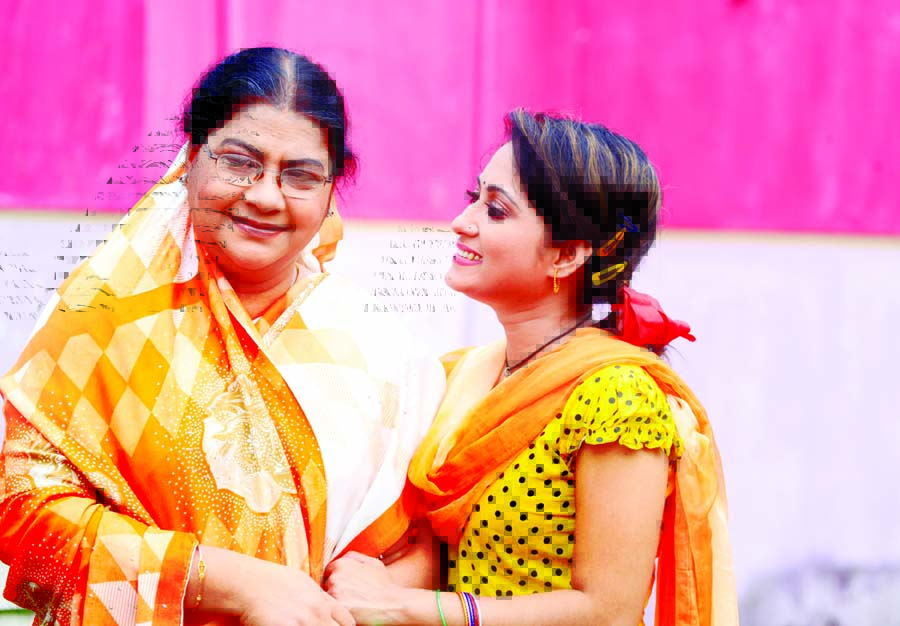 Legendary film actress Khaleda Akhter Kalpana once wrote her name in the field of acting leaving teaching profession. She wanted to return her previous profession. Due to her engagement in acting in the movies one after another she couldnât back to her teaching profession later. Still now she is engaging herself with acting.
On the occasion of coming Eid-ul-Fitr Khaleda Akhter Kalpana and promising actress Seuli Sila are acting together in two important roles in an Eid serial titled Shongsar Japon. Hasan Jahangir has written script of the serial, while he is also giving its direction. Shooting of the serial is being held in Sector No 11 of Uttara in the city now. Eid serial will be aired on Asian TV during Eid festival.
While talking about Seuli Sila Khaleda Akhter Kalpana told this correspondent, âThough Seuli Sila is newcomer but she has already established her position in media. Her sincerity, dedication to work and respect to the senior actors have attracted me. She is acting well in the serial.â
Seuli Shila shared her feelings by this way, âKalpana madam likes me as her daughter. I have gathered a lot of experiences working with her. I am grateful to director Hasan Jahangir bhai to give me the opportunity to act in the Eid serial Shongsar Japon.â
Therefore, on the occasion of Eid-ul-Fitr Khaleda Akhter Kalpana has finished work of another play titled Briddhashrom under the direction of GM Saikat.
It may be mentioned that Kalpana first worked with Sila in Nuru directed a play titled Malkabanu. Later, Sila has worked with her in many TV plays and two movies titled Bhaiya Number One and Jadrel Sontan till now.
On the other hand, Khaleda Akhter Kalpana acted in 500 movies till now. She has acted mostly under the direction of Abul Khayer Bulbul. She most of the time is familiar as âmother of Rubelâ on the screen.
Though she had firstly worked in Mizanur Rahmanâs Hanuman-er Patal Bijoy, Kalpana acted first released movie was Motin Rahmanâs Radhakrishna.Â Â Â