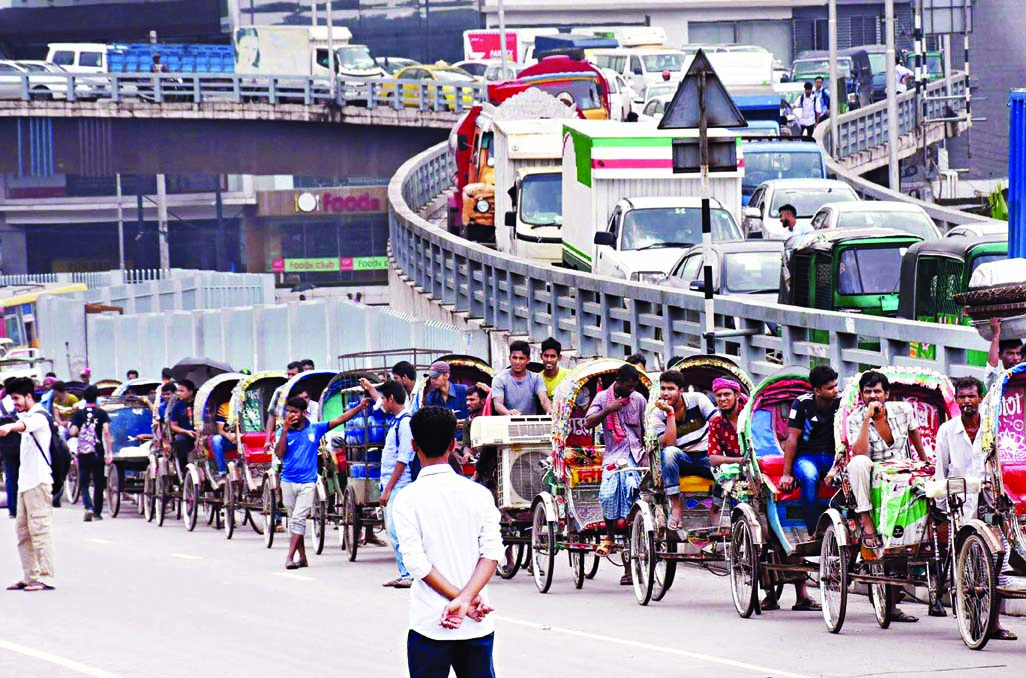 Students struggling hard to help maintain discipline in traffic movement in course of their campaign for safe roads causing sufferings to commuters amid road chaos, leading to stuck up of hundreds of vehicles on U-loop of Rampura area on Saturday.

Students from various educational institutions have taken to the Dhaka streets for a seventh consecutive day of protests to demand safer roads.
The protesters have taken up position at different parts of the city clad in their school uniforms and are checking driver's licenses on Saturday morning.
Only private cars and CNG-run autorickshaws are on the road on Saturday after transport owners stopped bus services in response to the protests, citing security concerns.But students have not blocked the roads and are, instead, stopping vehicles to check driver's licenses and fitness certificates.
A group of students gathered at the roundabout in Mirpur-10 and led a procession towards Mirpur-1 before returning to Mirpur-10 to begin checking driver's licenses.
"We'll not leave the street unless all of our demands are fulfilled," said a student of Adamjee Cantonment College.
Students at Mirpur 2 said they have been attacked during their protests. Two students of Shaheed Ramiz Uddin Cantonment College were killed in a bus accident on Jul 29 which ignited a massive protest movement by Dhaka students demanding safe roads. Although the government has urged the students to return to their schools with promises to fulfil their nine-point demands, the protesters have not been satisfied by the assurance.
As on previous days, students are controlling traffic at Mirpur-6, Mirpur-2 and Mirpur-1. Police were seen to join the students in checking the licenses.
However, the police prevented students from occupying the road at Rampura Bridge around 10:00 am. None of the officials at the offices of the assistant police commissioner of traffic (east) spoke to the media.
"Police will not allow any blockade at road in an effort to reduce the suffering of the common people," said a police official at Rampura Police Station, who asked not to be named.
Police were also seen trying to persuade the students to put an end to their demonstrations.