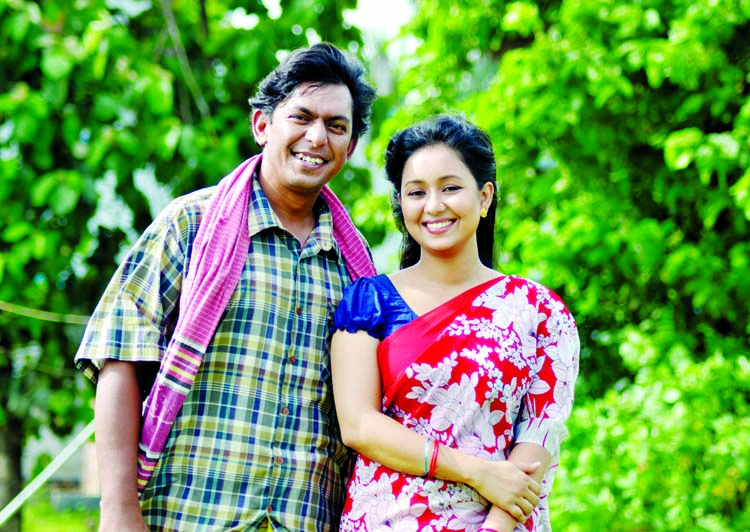 There are some films in the country, which became legendary for its popularity and remains alive in our minds over the years. Gias Uddin Selim directed Monpura is that type of film.
Though this film is yet not completed 12 years of itâs releasing it became popular to most of the viewers and film-lovers. Viewers also liked pair of the movie -Farhana Mili and Chanchal Chowdhury.
This popular couple again performed together in a play under the direction of Saif Ahmed.
He informed that the play will go on air in any satellite channel, which title is not yet finalised. Shooting of the play was wrapped up on Tuesday in the cityâs Uttara area.
While talking about her feelings working in the play Farhana Mili told this correspondent, âIn real life, I always prefer to stay in very simple way. I have not much demand. In the story of the play, my character is like that. For this reason, I have enjoyed to acting in the play. I have recalled the memories of Monpura while taking part in shooting of the play.â
Chanchal Chowdhury shared his feelings by this way, âI couldnât believe that Farhana Mili has detached herself with media. She has acted well in the play. I am satisfied with my role in the play. I think viewers will also enjoy the play.â
Chanchal Chowdhury has recently finished shooting of Towhid Mitulâs play Mone Rekho Mitthye, which is scheduled to be aired on Channel i in Eid-ul-Fitr. But Chanchal wants to work in new movie now. Due to mismanagement of his schedule he couldnât perform in any movie right now, he said.
On the other hand, on the occasion of coming Eid-ul-Fitr, Farhana Mili has acted in several plays. Before Eid Mili acted a play titled Polash Ranga Bhore, directed by Polash Shah Niaz, will be aired on NTV on July 26.
Therefore, Miliâs acted other plays - Aronno Anwarâs Juari, Sayeed Rinkuâs Omelette and Ami+Tumi=Ami and Chayanika Chowdhuryâs a play.
Meanwhile, Miliâs acted another play titled Keu Kotha Rakhe Na has been made to air on Desh TV. Shankar Shawjal performed against Mili in this play directed by promising director Rajib Salehin.
Mili has acted in Alvi Ahmedâs two playsÂ Â  on the occasion of Eid festival. These are: Nesha Laga Swapno and Shudhu E Karon-e Palate Chai.Â Â Â