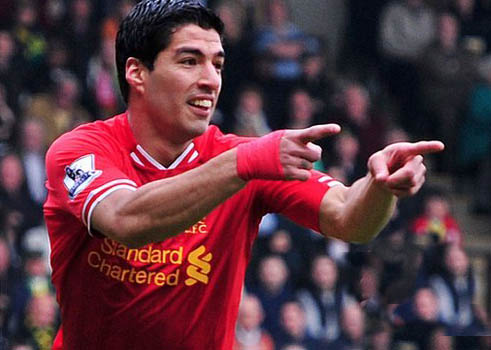 Liverpool striker Luis Suarez is now "100%" a Barcelona player, the Spanish club has said.
A Â£75m deal was agreed last week for the 27-year-old Uruguay international.
The La Liga runners-up are not able to present the player to their fans as he is serving a four-month ban from football-related activity for biting Italy defender Giorgio Chiellini.
However, Barca director of sport Andoni Zubizarreta told a news conference: "He is 100% a member of the club."
He added: "Luis Suarez is a Barca player to all extents and purposes. It is fact."
Suarez will be ineligible to play for Barca or even to train with his team-mates until November unless the appeal lodged with the Court of Arbitration for Sport (Cas) is successful.
But Zubizarreta said he was convinced Suarez will be a "positive" acquisition.
"We accept people here, imperfections and all," he said.
"I am sure Luis Suarez will be someone positive for us in the future. Luis Suarez is an important player for this club but the club is more than its players."
The ban handed to Suarez for his biting offence last month was the biggest in World Cup history, beating the eight games given to Italy's Mauro Tassotti for elbowing Spain's Luis Enrique - now Barca boss - in 1994.
Suarez, who was last season's Premier League top scorer, signed for Liverpool from Ajax in 2011 for Â£22.7m, and had four years left on his contract at Anfield.
"Luis Suarez, Lionel Messi, Neymar? Coaches want to have the best players and the more the better. I'm delighted to have them," said Enrique, who was appointed Barca manager in May.
"My target is to put a team together which is as competitive as possible. It is not about just two or three players, it is the whole team. But the better the players we sign, then great."
When he is eventually eligible to play again, Suarez is expected to wear the number nine shirt in a Barcelona forward line that includes both Argentine Messi and Brazilian Neymar.
The club is looking to rebuild under Enrique after last season marked the first without a major trophy in six years.
If the transfer fee is confirmed at Â£75m, it will be the third biggest in football history after both Gareth Bale (Â£86m) and Cristiano Ronaldo (Â£80m) to Real Madrid.