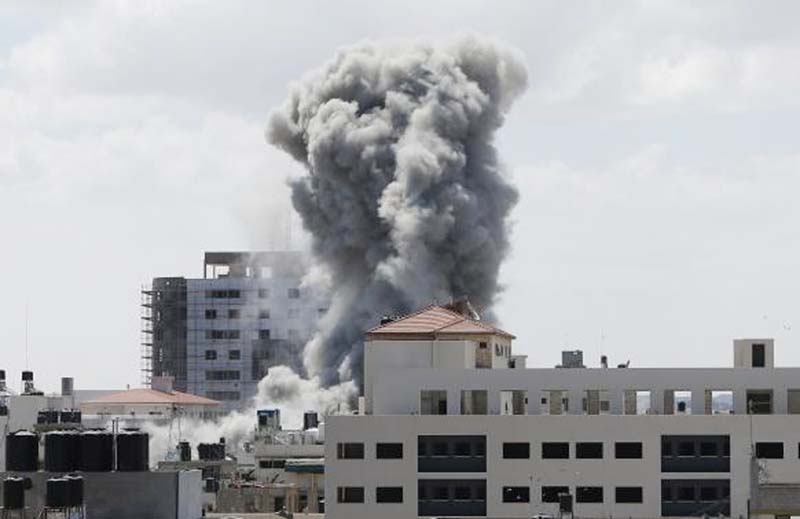 Israel is prepared to "significantly widen" its ground offensive against militants in the Gaza Strip, Prime Minister Benjamin Netanyahu has said.
He said the military was targeting the Hamas tunnel network, which it could not do "only from the air".
Thousands of troops moved into parts of Gaza on Thursday night, backed by tanks and artillery fire.
Hamas, the Palestinian group that controls Gaza, has said Israel will "pay a high price" for the invasion.
At least 24 Palestinians and one Israeli soldier have been killed since the ground offensive began on Thursday, Gaza's health ministry said.
The dead included three Palestinian children killed by Israeli tank fire in the north of Gaza, medics said.
The decision to send in troops came after 10 days of intensive rocket fire and air strikes between the two sides.
"Last night our forces began a ground operation to hit the terror tunnels crossing from Gaza into Israel's territory," Mr Netanyahu told a special cabinet session broadcast live on television on Friday.
"It is not possible to deal with the tunnels only from the air."
He added: "My instructions... are to prepare for the possibility of significantly widening the ground operation, and the military is preparing accordingly."
Mr Netanyahu said the operation came after Israel had agreed to an Egyptian proposal for a ceasefire and to Thursday's five-hour UN humanitarian ceasefire.
"In both of these opportunities Hamas continued to fire," he said. Palestinian militants have used tunnels to carry out attacks, some of which have been thwarted by the Israeli military.
On the morning of the ground offensive, the Israeli military intercepted 13 militants who had infiltrated Israel through a tunnel, and were believed to be planning to attack a nearby kibbutz.
Some 258 Palestinians - three-quarters of them civilians - have died since the start of the wider Israeli operation on 8 July, officials in Gaza say. An Israeli civilian was killed from mortar fire, and several Israelis have been seriously injured, Israeli medics say.
On Thursday, Israel approved the drafting of 18,000 more reservists, bringing the number of extra troops called up since 8 July to 65,000.