Bolt looking to his first football start in Sydney 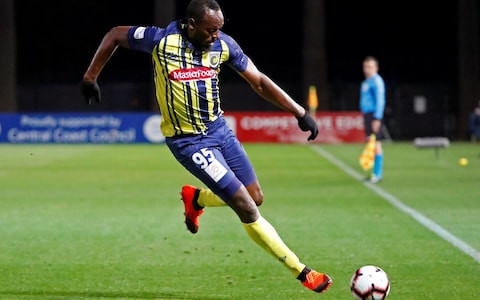 Sprint superstar Usain Bolt looks set to make his first start as a professional footballer Friday, a challenge he said could determine if he has a future in the sport of his boyhood dreams.
Bolt said the coach of his Central Coast Mariners, Mike Mulvey, had indicated he would be in the starting line-up in a friendly against Macarthur South West United in Sydney.
"For me, that's always a good step, when the coach is satisfied with your fitness to put you in the starting line up - that's always a big step," Bolt told Mariners' club media Wednesday.
"I am just happy to get the chance and go out there and start, and do my best because that is the key thing."
The eight-time Olympic champion made his footballing debut in late August in a 20-minute cameo as a substitute on the left wing, nearly scoring but tiring quickly.
Bolt said he had improved his fitness since, and expected to spend more time up front.
"My movement and my touch is much better now," he said. "I've learnt how to set my body and where to place the ball."
The A-League has been struggling in recent years with fewer fans and dwindling TV ratings, with football chiefs hoping the arrival of big names like Bolt will boost local interest.
The 100m world record holder said he expected some nerves when out on the pitch, but was excited by the opportunity to prove his worth as a footballer.
"This will be a big game. I think it will determine if the club makes up its mind on what to do with my career. So for me it's a very important game," he said.
"I'm looking forward to prove myself."