The Adventures of Supergirls Vol. 2 and Her Stories App launched at DLF 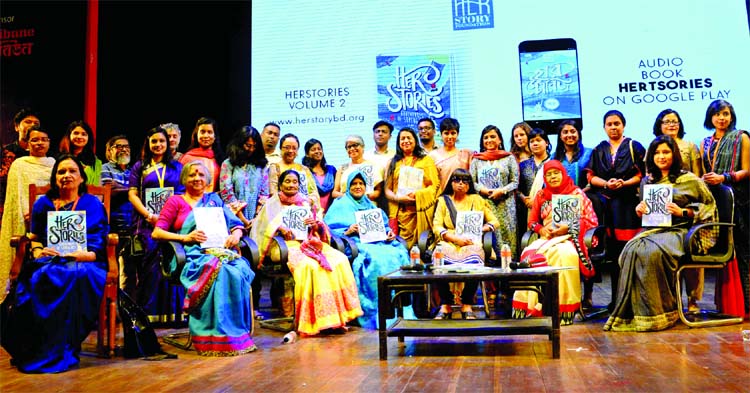 Rayhanul Islam :
Her Stories: The Adventures of Supergirls Vol.2 and an audio book for Android platform Her Stories App were unveiled on Friday at Dhaka Lit Fest.
Her Stories Foundation organized the function at Abdul Karim Shahittya Bisharad Auditorium at Bangla Academy in the city.
The launching programme concluded with a panel discussion, where Engineer Khaleda Shahriar Kabir, first female graduate of Civil Engineering Department of BUET, Dr. Sayeba Akther, inventor of Sayeba Method to save women from hemorrhaging during child birth, Nomita Halder, an acid victim and Kangalni Sufia, Baul and Lyricist were present as panel discussant and shared their combative success stories.
Journalist Nobonita Chowdhury conducted the function.
Minister of Environment and Forest Anisul Islam Mahmud, Managing Director of ENERGIS Power Corporation Javed Hosein and Her Stories Foundation Chairman and Executive Director Zareen Mahmud Hosein were present at the function.
The four successful women personalities shared their combative journey to the audiences.
Nomita Halder was affected by Acid terrorism at her early stage and lost her two eyes. But she did not loose her patience for education. After that incident, she continued her education and now she is a teacher of Baptist Mission School. She wrote some books by brail method. Nomita thanked the organizers for giving her such honour.
Dr. Sayeba Akther said, I invented the method that saved pregnant mother during childbirth. I am very delighted to say that my invention is saving mothers' life who cannot effort big amount of money for treatment during pregnancy, especially in the developing countries like ours.
I will continue my journey with the pregnant mothers to save their life, she added.