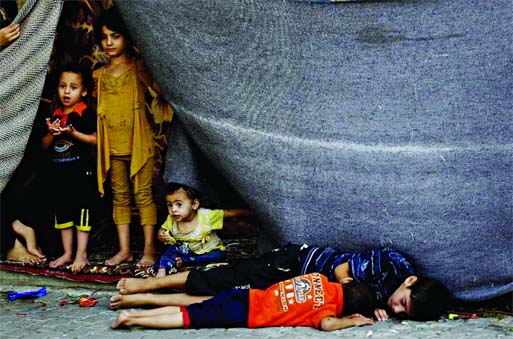 Palestinian children seek refuge from the fighting at a UN school in the northern Gaza Strip refugee camp of Jabalia, on July 23, 2014. AFP Photo

UN Human Rights boss Navi Pillay says Israel's military actions in Gaza "could amount to war crimes"The UN's top human rights official has condemned Israel's military actions in the Gaza Strip, saying that war crimes may have been committed.Navi Pillay told an emergency debate at the UN Human Rights Council in Geneva that Israel's military offensive had not done enough to protect civilians.She also condemned Hamas for "indiscriminate attacks" on Israel."There seems to be a strong possibility that international law has been violated, in a manner that could amount to war crimes," Ms Pillay said.However Israel, which claims the UN Human Rights Council is biased, is unlikely to co-operate with any authorised UN investigation, the BBC's Imogen Foulkes in Geneva reports.Israel's Justice Minister Tzipi Livni described the UN Human Rights Council as an "anti-Israel" body, Reuters news agency reported.At least 649 Palestinians and 31 Israelis have been killed in the past 15 days of fighting, officials say.A foreign worker in southern Israel was also killed by a rocket fired from Gaza on Wednesday, police said.The UN says about 74% of those killed in Gaza are civilians, with medical clinics among the facilities hit by air strikes."Civilians in Gaza have no safe place to go as 44% of the land has been declared a 'no-go zone' by the Israeli army," the assistant secretary-general at the UN Office for the Coordination of Humanitarian Affairs said."Families are taking the heart-wrenching decision to split to different locations - mother and son to one; father and daughter to another - hoping to maximise the chance one part of the family survives." There was heavy fighting in the town of Khan Younis in the southern Gaza Strip on Wednesday.Eyewitnesses say around 5,000 Palestinians, some waving white flags, are fleeing in a state of panic following a ground incursion by Israeli troops, the BBC's Paul Adams in Gaza reports.Meanwhile US Secretary of State John Kerry arrived in Israel on Wednesday to try to help negotiate a truce."We have certainly made some steps forward. There is still work to be done," he said shortly after arriving.Kerry landed at Ben Gurion airport near Tel Aviv, despite a 24-hour ban on US flights there imposed by American aviation authorities. Several European airlines have also suspended flights to Israel after a rocket from Gaza landed near the airport.Fighting continued overnight on Tuesday. An air strike in Khan Younis left at least five people dead. An Israeli soldier was also killed.A Palestinian woman whom the BBC filmed being pulled from the rubble of a Gaza blast on Sunday also died from her injuries, her doctor said. Ten of her relatives were killed in the blast. UN chief Ban Ki-moon and Kerry are in the region to try to bring an end to the fighting.They have both called for an immediate end to hostilities and for the underlying causes of the conflict to be addressed.Referring to a 16 July Israeli air strike that killed children playing on a beach in Gaza, Ms Pillay said "the disregard for international humanitarian law and for the right to life was shockingly evident".She also condemned rocket attacks from Gaza into Israel.Despite her condemnation of Hamas attacks on Israel, Ms Pillay clearly views Israel's actions in Gaza as disproportionate, our correspondent says. "Israel is acting according to international law," Justice Minister Tzipi Livni said."It is regrettable civilians are killed, but when we call on them to vacate and Hamas calls on them to stay, then that is what happens." A 2009 UN human rights report said that Israel's military and Hamas had each committed potential war crimes during Israel's 2008-2009 offensive in Gaza.The Goldstone report was rejected by Israel and the US as biased and flawed. In 2011, the report's author, South African judge Richard Goldstone, said that new accounts indicated Israel had not deliberately targeted civilians.