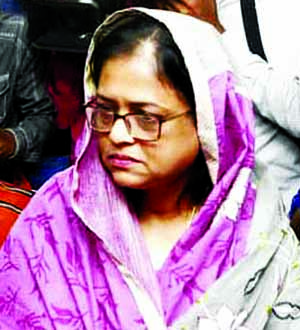 Md Joynal Abedin Khan :
Hundreds of students, guardians and locals on Tuesday protested the committing of suicide by a student ofÂ  Viqarunnisa Noon School and College (VNSC) named Aritree Adhikari after her parents and she were rebuked by the head teacher for using mobile phone in examination hall.
The suicide has sparked fury among the students, guardians, electric, print and social media. Â
Meanwhile, the guardians took position in front of the school's Bailey Road campus in the morning and staged demonstrations demanding removal of the accused teachers and the Principal.
They also warned the authorities that they would be bound to choose tough movement if their demands, including removal of the Principal, were not met immediately.Â Â  Â
Protests erupted on the venue around 9:30am, as the day progressed in the adjacent roads and streets, witnesses said.
Other than demanding justice for the ninth-grader, protesters chanted slogans seeking the immediate removal of their Head teachers, they said.
Many of them carried placards venting their anger against those who were responsible for the ninth grader's suicide, they added. As per the demand, the VNSC Governing Body President Golam Ashraf Talukder said that the morning Shift In-Charge Zinnat Ara had been suspended on Monday night.
A show-cause notice was served and asked her to refrain from discharging her duties until the end of the probe is completed over the suicide incident. The Principal was asked to explain her position, he said.
Amid the protests, the High Court made an observation that the suicide by the student of Viqarunnisa Noon School is heart-rending and termed the insult of her parents a 'very bad example'.
Meanwhile, two separate probe committees were formed to probe the suicide incident.
The government formed a probe committee led by Prof Mohammad Yusuf, Director of Dhaka Regional Education Office. Two other members of the committee are Deputy Director Shakhawat Hossain of Dhaka Regional Education Office and Dhaka District Education Officer Benazir Ahmed.
The committee has been asked to submit its report within three days.
Besides, the school authorities formed a three-member probe committee which was asked to submit its report within three days.
The committee members are Ataur Rahman, Khurshid Jahan and Ferdousi Jahan. They all are governing body members of the educational institutions.
Meanwhile, Education Minister Nurul Islam Nahid visited VNSC Bailey Road campus on Tuesday morning.
Talking to reporters about the incident, he said, "I want to say it clearly that we, the Education Ministry, are taking the incident of suicide as a serious matter. We think this incidentâ¦ the suicide of the student is very painful to us. We can't ignore it so easilyâ¦."
Â "A three-member probe committee has been formed to identify who provoked it (suicide) and steps will be taken once the report is submitted," he said.
Â "Considering the issue as not only psychological but also criminal one, we've discussed it with the police and asked them to cooperate with us," Nahid said adding, "We've talked to the victim's guardians over phone. They're so shocked that they're now staying home."
Aritree's father Dilip Adhikari, alleged that Nazneen Ferdous, the principal of the institution, while asking him to collect the student's transfer certificate, misbehaved with his family.
During the discussion, the student ran away from the Principal's office. Later, we returned home and found her hanging from a ceiling fan at her residence.
Aritree's relative Soumitra Sarker had said that when Aritree took her parents to the school on Monday, they were insulted in the Principal's room. The authorities also threatened to rusticate her.
Returning home from school, Aritree entered her room and locked the door. Later, the family broke open the door after she had not answered knocks for a long time, according to him.
Contacted, Principal Nazneen Ferdous, refuted the allegation of insulting the parents of the student.
She said, "The student was caught with a mobile phone, which is strictly prohibited. In these circumstances, we usually expel the students."
"However, we called her parents to tell them she would not be able to sit for the rest of the exams, and a decision on the incident would be taken after discussions with the governing body. We told them that they would be informed of the decision later," she added.
In a query, she said, Aritree was barred from an exam on Sunday after she was found using a mobile phone. We called her parents only to inform them about the incident. They were not insulted."
On Monday, Aritree Adhikari, daughter of Dilip Adhikari, and a Class-IX student of Viqarunnisa Noon School and College, reportedly committed suicide by hanging herself with a ceiling fan at their city's Shantinagar residence after allegedly being rebuked by teachers for using mobile phone during examination.