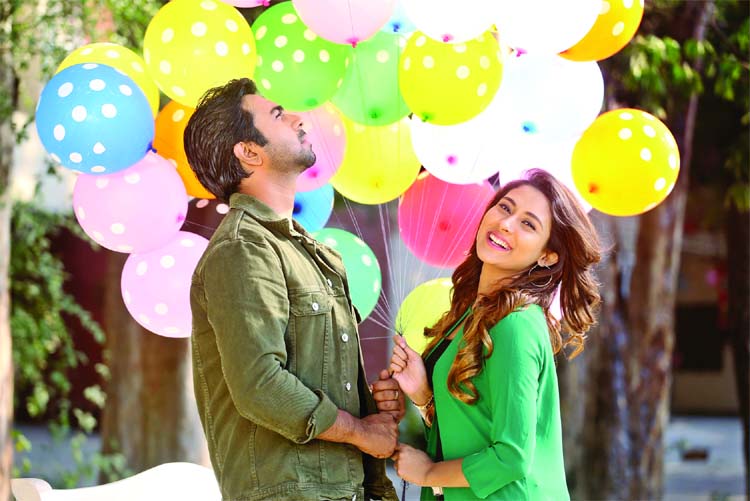 Sheikh Arif Bulbon :
Mehazabien Chowdhury and Ziaul Faruk Apurba is one of the best pairs of present time regarding the viewersâ choice. This pair came into limelight in the beginning of 2018 acting in Shihab Shahinâs a play titled Tumi Jodi Bolo. After working in this play, this pair became popular to all. Later, they worked together in several plays and telefilms like Jakaria Showkhinâs Jodi Tumi Jante and Jolsha Ghor, Mizanur Rahman Aryanâs Sukhey Dukkhey and Astha, Mahmudur Rahman Himiâs Tomar Opekkhai and Ichchhey Kham, Mabrur Rashid Bannahâs Kotodin Por Holo Dekha, BU Shuvoâs Tukro Prem-er Taan, Sabbir-Mamunâs Pashapashi, etc. Round the year viewers enjoyed their performances in these plays and telefilms.
BU Shuvo has made two plays on the occasion of coming Valentineâs Day casting Mehazabien and Apurba. These are: Dream Girl and First Love. Shooting of these two plays were done in the capitalâs different places including Uttara area. These two plays will be telecast in two separate satellite channels on February 14, 2019. Â
Both Mehazabien and Apurba informed that stories of these two plays are romantic. While talking about Mehazabien Apurba told this correspondent, âBasically nobody willingly create any pair. Basically viewers create a pair on the screen. I am grateful to them. In fact, Mehazabien tries to understand script before taking part in shooting.Â  She also concentrates to her look, costumes and character of her work. She is a professional, serious and dedicated actress. For this reason, she is exceeding others now.â
Mehazabien shared her feelings by this way, âIt is really a great pleasure that viewers have accepted us as a pair. It is right I love and respect viewersâ choice. For this reason, directors prefer to select us in their works. I always get co-operation by whom I work.â
âFrom the very beginning Apurba Bhaiya has been co-operating me. He is a top class actor. He is now also giving direction. As a co-actor, he always co-operate me. It is really a pleasure because our performed works always entertain the viewers,â she added.Â