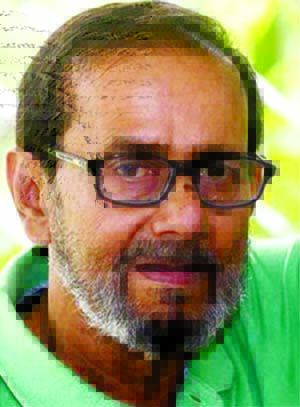 Renowned film and drama director Saidul Anam Tutul has died in a Dhaka hospital at the age of 68.
Tutul who suffered from heart disease was admitted to Labaid Specialised Hospital three days ago. Â
He breathed his last around 3:15pm on Tuesday, said Saifur Rahman Lenin, assistant general manager of corporate communication at Labaid.
"He had a massive heart attack. He was undergoing treatment under the supervision of Prof Dr Mahbubur Rahman, a specialist in heart disease," he said.
Tutul is survived by his wife and two daughters, Oishee Anam and Amrita Anan. He was the first general secretary and a life-time member of the Directors' Guild, a television drama directors' organisation. Â
Amrita Anam, the younger daughter of Tutul, lives in the US. The elder, Oishee, arrived in Dhaka on Monday, according to the Director's Guild.
Tutul will be buried after Amrita's return to Bangladesh on Wednesday. Â
Tutul was admitted to the hospital due to his illness on Saturday and was later put on life support. Â
He was the founder of renowned production house 'Akar' and directed a government-funded film titled 'Kalbela', which has yet to be released.
His first movie 'Adhiyar' was also funded by the Bangladesh government and was released in 2003. He won the first Bangladesh National Film Award for Best Editor for 'Surja Dighal Bari' in 1979.
He also edited many other popular films, including 'Ghuddi', 'Dahan,', 'Dipu Number 2' and 'Dukhai'.