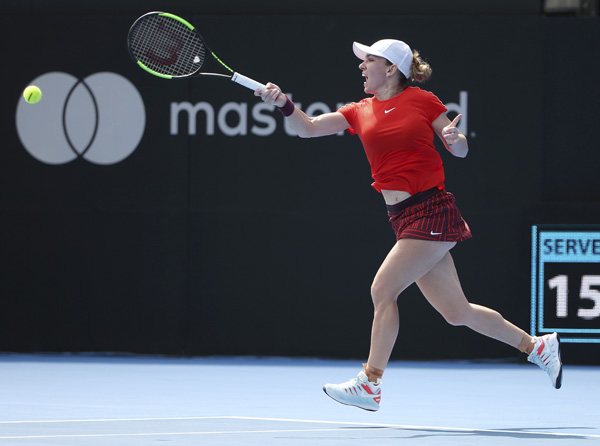 Simona Halep of Romania hits a forehand to Ash Barty of Australia during their women\'s singles match at the Sydney International tennis tournament in Sydney on Wednesday.

World number one Simona Halep's preparations for next week's Australian Open suffered a huge setback Wednesday when she was bundled out of the Sydney International at the first hurdle.
The Romanian hadn't played since withdrawing from the WTA Finals in October with a herniated disc, and was no match for fast-rising Australian Ashleigh Barty, who scored the biggest win of her career 6-4, 6-4.
Halep, the reigning French Open champion and 2018 Australian Open runner-up, had a bye through to the second round, meaning she heads to Melbourne Park for the opening Grand Slam of the year with just one game under her belt.
Barty, who ended a breakthrough 2018 with a WTA title in Zhuhai and is now ranked 15, brought the momentum into the new year.
She had already accounted for another French Open winner, Jelena Ostapenko, in the opening round and had an extra gear against Halep, breaking serve twice to win the first set.
Halep, without a coach after splitting with Darren Cahill who wanted to spend more time with his family, was first to break in the second set and had a chance to hold for 5-3.
But Barty was undaunted, using her signature court craft to break straight back and secure victory two games later.
"It was extremely difficult conditions, very swirly down at court level. So I figured if I'm going to play Sim anytime, and it's her first match, it was now. I was very happy to make the most if it," said Barty.
"I had nothing to lose out here so I just came out and played with freedom.
I believed I could win."
Earlier in the week, Halep admitted the back injury that ended her 2018 season early was "very scary", but said she had recovered and was feeling fit.
The early finish to 2018 was a disappointing end to a spectacular season, which saw the 27-year-old secure the year-end number one ranking for the second year running.
She got off to a stellar start, reaching the Australian Open final and went on to win the Shenzhen Open, the Rogers Cup and her debut Grand Slam crown at Roland Garros.