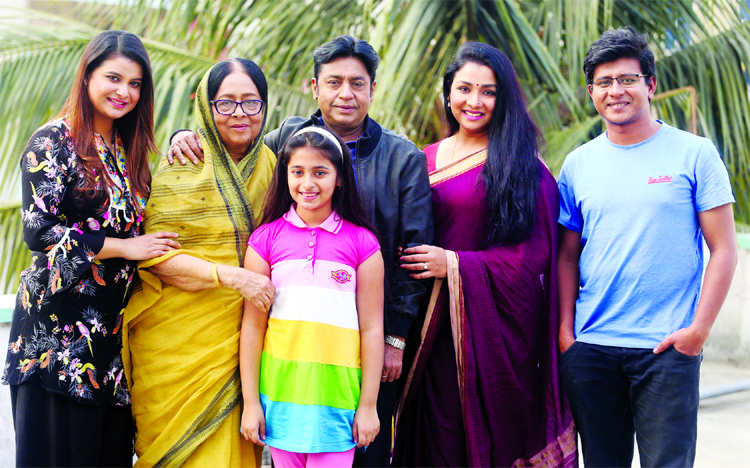 Sheikh Arif Bulbon :
In the beginning of New Year, popular film and TV play director Mostafa Kamal Raz has started to make a new drama serial titled Family Crisis based on totally family oriented story.
Director Raz informed that National Film Award winner actor Shahiduzzaman Selim is playing the lead role in the serial which story is revolved with him.
Besides Selim, Sharmily Ahmed, Rosy Selim, Munira Yusuf Memy, Runa Khan, Shabnam Faria, Monira Mithu, Shamim Hasan Sarkar, Mithila, Sanjana Sarkar Ria, Sarika Saba, child actress Raisa, among others, are also acting in this serial in different roles. Maruf Rehman wrote story of the serial. This serial will be telecast on NTV in April.Â  Â
While talking about acting in the serial Shahiduzzaman Selim told this correspondent, âUnder Razâs direction for the first time I am acting in a serial. After many days I am working in a good story based serial. Raz is trying to make the serial cordially and sincerely. I am trying my level best effort to portray my role properly in the serial. Co-actors who are working in the serial they are also trying their level best while acting. For this reason, I am very much optimistic about the drama serial.â
Noted actress Sharmily Ahmed said, âI give thanks to Raz to cast me in such a nice story based serial.â
Runa Khan shared her feelings by this way, âIn our country, family oriented story based serial always get popularity among the viewers because viewers always want to find their own stories in this type of serials. Viewers will obviously get their own life stories in the serial Family Crisis. I give thanks to Raz to cast me in this nice story based serial. I am really hopeful about the serial.â
It is mentioned that Raz directed last drama serial was Post-Graduate, which was aired on NTV. He will start to make his new movie Jodi Ekdin either in February or March, he also said.Â