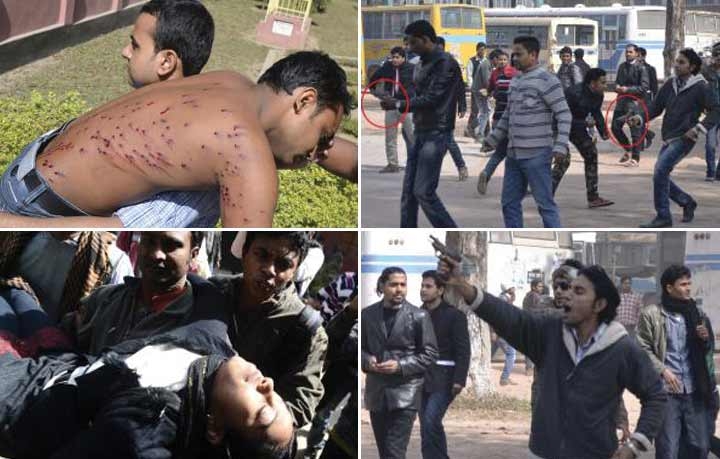 Rajshahi University authorities have called an emergency syndicate meeting hours after police and Bangladesh Chhatra League (BCL) attacked students demanding the cancellation of hiked fees and evening courses on Sunday."We have called the meeting at 7pm to decide on what the university administration should do next under the circumstances," Pro-Vice Chancellor Sarwar Jahan Sajal told bdnews24.com. Witnesses said BCL activists had attacked on the agitating students several times between morning and noon.They had apparently also been seen firing at the agitators. Over 50 students had been injured by bullets and tear canisters. Extra police have been deployed on the campus for the sake of security, said Sajal, adding that it BGB would not have been proper. The agitating students, meanwhile, said they would carry on their movement on Monday as well, alleging the university administration had a hand in the attacks.Â  One of the movement organisers, Ahasan Habib Roky, made the announcement at a rally in front of the university's central library around 3:45pm in the presence of a few thousand students. "It is heinous on the part of the administration to have provoked the attack. We will continue our movement unless the attackers are punished and our demands are met," he said. He vowed to continue the movement by taking position on the campus even after the administration closed the residential halls. The students, after the rally, returned to halls in processions.