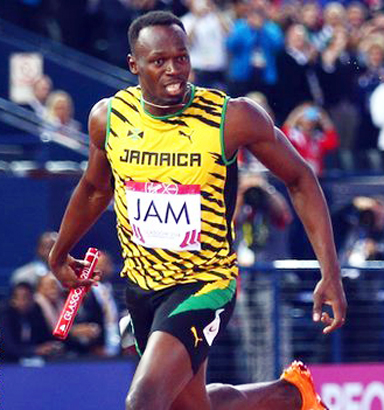 Multiple world and Olympic champion Usain Bolt says he will make the 200m his focus after the Commonwealth Games.
The 27-year-old 100m and 200m world record holder only competed in the 4x100m relay at Glasgow 2014, helping Jamaica to gold at Hampden Park.
"I think I've done enough in the 100," he told BBC Radio 5 live.
"I know people want to see me run fast in the 100 but I love my 200 and I want to do something special for myself. So for me, my main aim is the 200."
Bolt, who will turn 28 on 21 August, set the 200m world record of 19.19 seconds in Berlin five years ago.
The Jamaican also posted a 100m world best of 9.58 at the same World Championships.
"The world record can keep going down. You never know who's going to show up next and dominate," he added.
"I've said I want to run sub 19. That's one of my biggest goals and my biggest dreams, so I'm definitely going to be training hard and seeing what I can do."
Bolt, who will miss the closing ceremony later on Sunday, said the older he gets the harder it is to stay at full fitness.
The eight-time world champion's next race is a 100m on Copacabana beach in Rio de Janeiro on 14 August.
"You can feel a difference sometimes especially after a workout. I have to take more ice baths now which is not so much fun.
"I have to work a little bit harder and not go out as much as I used to."
But the hard work paid off for the Jamaican, who added Commonwealth gold to his collection on Saturday night and paid tribute to the Glasgow crowds.
"I'm sad I didn't get to run the individual event because the energy out here is just wonderful - the people give you a lot of energy.
"The people make a Games a Games, and the people really came out and supported, the stadium was always full, the energy was always up. For me that's a Games. Everything was perfect."
The Manchester United fan said he hoped that when he hung up his running spikes he might be able to work his way into Louis van Gaal's team.
"Hopefully when I retire I can talk to him and get a spot in the team. Van Gaal means business - he's solid and I'm happy. Manchester United are back."