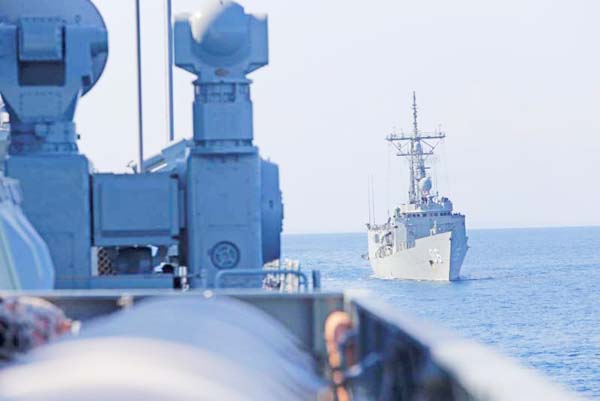 The Chinese Navy frigate Huangshan and Australia\'s frigate Newcastle attend a drill during the Exercise Kakadu in Darwin, Australia.

Australia has admitted it had not focused enough attention on its Pacific backyard but vowed to make "long overdue" amends, amid growing Chinese influence in the region.
"I think we would have to accept some criticism," Australia's minister for international development and the Pacific, Anne Ruston, told AFP on Friday.
"We have perhaps not put as much attention and effort into our own region as we should of."
In recent months, Ruston has been at the sharp end of trying to fix that - jetting to-and-fro between Australia and far-flung Pacific Islands, as part of Prime Minister Scott Morrison's "step-up" in the region.
The policy includes more aid, more security assistance, more diplomats working in the region and, crucially, more face-to-face contacts. It is, in large part, a response to Beijing's growing economic, political and military activity in the region.
"I think we've had our focus gazed much further afield for a very long time," said Ruston. "It has certainly, more recently, been forced to be refocused back onto our own region." "That's a good thing. And it was certainly long overdue."
While Australia was more focused on Fallujah than Fiji, China has been doling out loans and investment in the region and scooping up natural resources and telecoms contracts.
Still, Ruston rejected suggestions that Australia, by moving to develop security facilities in Papua New Guinea and Fiji is causing the type of militarisation many complain China is embarking on.
"This is our region, this is our area, this is where we live," she said. "However you see the security and sovereignty of our region the Pacific is extremely important to Australia."
Australian re-engagement has been hampered by deep disagreements with Pacific nations over the conservative government's sceptical stance on climate change - an existential threat to many island nations.
Fiji Prime Minister Voreqe Bainimarama has been among those accusing Australia of putting its coal industry "above the welfare of Pacific peoples". "It is a very, very real issue for them," Ruston acknowledged.
In places like Kiribati - where the average height of the land is a few feet above sea level - it is "singularly the biggest issue that they have at the moment".
To square the circle, Canberra diplomats have tried to separate climate policy writ-large from day-to-day work to temper its impact.
The mitigation and infrastructure needs are enormous, "we talking tens of billions of dollars to be able to get the Pacific up to the kind of development standard, that I think Pacific aspires to have for itself", said the minister.
Australia has committed to some ambitious projects, like helping Papua New Guinea bring electricity to 70 percent of the population by 2030. Today the percentage stands in the low double digits.
But even that is another issue that has been complicated by Australian domestic politics - which sees Papua New Guinea almost exclusively as the location of a deeply controversial offshore detention facility.
"I think it is the challenge of the job," said Ruston of balancing domestic and international issues, admitting that Australians have not been totally won over by the idea of long-term development assistance.