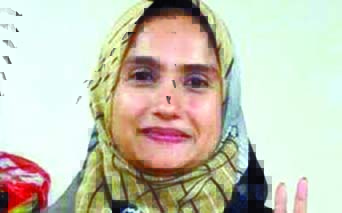 A Bangladeshi expatriate woman living in Japan has been killed at her home.
Japanese police have detaied her husband in connection with the murder.
Shamima Akhtar, 40, had lived at the home in Saitama Province with her husband BM Shahadat Hossain, 51, for a long time.
According to the police, one of Shamima's brothers had complained on Mar 2 that the couple had gone missing. Police began a search for the couple and found Shahadat receiving treatment at a Tokyo hospital.
Police say that Shahadat had killed his wife on March 4 with a sharp knife and attempted to commit suicide by throwing himself under a train. Security had rescued him and sent him to the hospital.Shamima's body was recovered from the home in Saitama on Friday evening.
Police say, Shahadat has confessed to the murder.
Local Bangladeshis told bdnews24.com that Shamima was the head of the Department of Epidemiology at the National Centre for Global Health and Medicine in Tokyo.
Shamima had completed her PhD from Rajshahi University in 2011 before moving to Japan to begin research work at the institution. Shahadat is unemployed.