10 Amazing ancient forests around the world 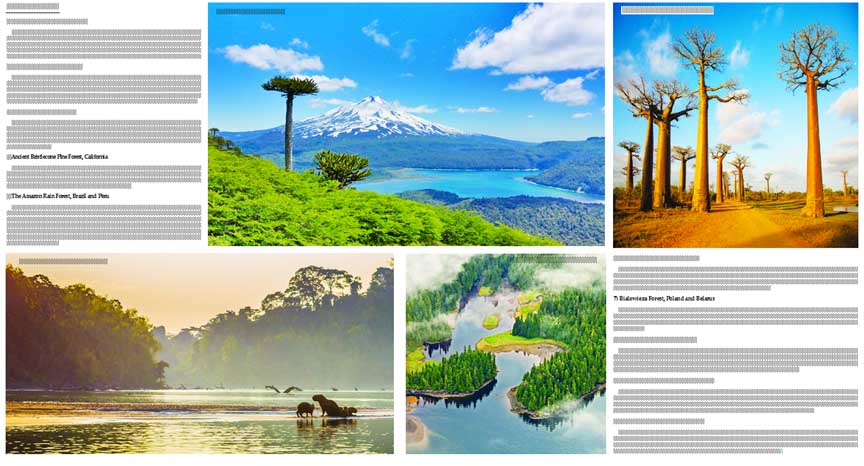 Weekend Plus Desk :
1) The Tarkine Forest, Australia
Tasmaniaâs Tarkine woodlands give a glimpse of what life on Earth looked like 300 million years ago. This temperate rain forest in Australia is home to the second oldest living tree species on the planet: the remarkable 3,000 year-old Huon pines. To explore this ethereal area blanketed with trees, waterfalls, rivers, caves, hills, and moorlands, bunk at Bonorongâs Tarkine Trailsâ Tiger Ridge, a hike-in only glamping getaway just over a half mile into Tasmania's wilderness.
2) The Araucaria Forest, Chile
The Chilean pine tree that spans the countryâs Lake District is thought to have evolved its peculiar paintbrush shape to ward off herbivorous dinosaurs during the Jurassic period. The Araucaria tree, which can live for approximately 1,000 years, grows in many parts of the Chilean Andes, but the forest is most spectacular set against the backdrop of piercingly blue lakes and snowcapped volcanoes in ConguillÃ­o National Park and Tolhuaca National Park.
3) Yakushima Forest, Japan
The moss-covered roots of Yakusugi trees, also known as Japanese cedars, have been steeping in the woods of Yakushima island for an estimated 7,000 years. This subtropical forest was considered so beautiful by Japanâs 17th-century royalty that the lush landscape was recreated in a garden on the mainland, and in 1993, the Yakushima Forest was declared a UNESCO World Heritage site.
4) Ancient Bristlecone Pine Forest, California
Located at nearly 10,000 feet in the California highlands adjacent to Sequoia National Forest, this grove is home to some of the oldest living trees on Earth. The most ancient among the protected forest's bristlecone pines-which are characterized by their unusual-looking twisted forms-is Methuselah, a tree estimated to be 4,841 years old.
5) The Amazon Rain Forest, Brazil and Peru
For 55 million years, the Amazon has been home to an astonishing array of wildlife-at least 10 percent of the world's known biodiversity, to be exact. The region represents the largest remaining tropical rain forest in the world and spans the greater parts of Brazil and Peru (but also includes portions of Colombia, Ecuador, and Bolivia). The depths of Amazonia are still largely inaccesible, but you can arrange rain-forest tours in many regions along the jungleâs perimeters. In Peru, the easiest gateways to the rain forest are through Pulcallpa, Puerto Maldonado, and Iquitos.
6) Daintree Rain Forest, Australia
This ancient rain forest north of Brisbane is an estimated 180 million years old (which makes it more than twice the age of the Amazon). The Daintree region stretches approximately 460 square miles and is the largest continuous tropical rain forest in Australia. It's also recognized as part of a UNESCO World Heritage site, the Wet Tropics of Queensland-one of the most significant regional ecosystems on the planet.
7) Bialowieza Forest, Poland and Belarus
Bialowieza Forest is one of Europeâs last remaining stretches of old-growth forests. In the Middle Ages, the lowland forest served as hunting grounds for medieval kings and tsars. In the early 20th century, Poland and Belarus declared the area-which lies on the border of both countries-a national park, and in 1979 the forest became a UNESCO World Heritage site.
8) Waipoua Forest, New Zealand
The oldest tree in this forest, known as Tane Mahuta-or âLord of the Forestâ -is an estimated 2,300 years old and stands at 150 feet tall. This coniferous tree was one of many in Waipoua Forest that was almost wiped out when European settlers arrived in the 19th century and started cutting kauri trees down for wood. Luckily, the ancient forest in New Zealand was designated a sanctuary in 1952 and has since been left largely undamaged.
9) Avenue of the Baobabs, Madagascar
Hundreds of years ago, the ancient trees that line the Avenue of the Baobabs were part of a tropical forest dense with Adansonia grandidieri, a strikingly beautiful tree endemic to Madagascar. After years of deforestation, only around 20 of the species-commonly known as baobabs-still stand tall along the famous dirt road. In their peculiar shape and unique âupside-downâ stature, these majestic trees are particularly imposing at dawn and dusk.
10) Tongass National Forest, Alaska
This temperate rain forest in Alaska is the largest national forest in the United States. At 16.7 million acres, Tongass National Forest takes up a vast stretch of southeast Alaska. The Tongass is home to some of the most well-preserved old-growth forest in North America-many of the trees are estimated to be over 800 years old. Deer Mountain trail, a difficult but popular 6.7-mile hike, traverses lush sections of the US national forest. n