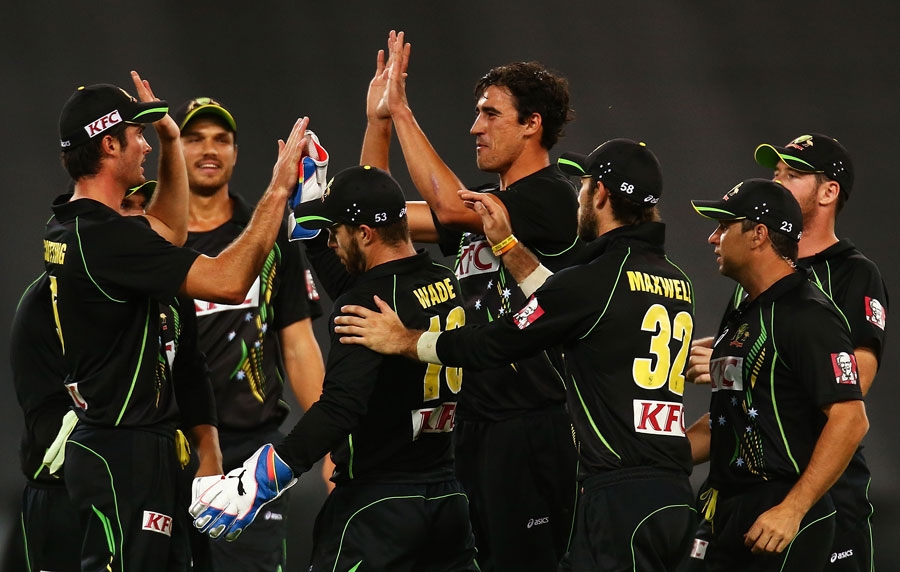 Mitchell Starc provided an early breakthrough to Australia, picking up the wicket of Luke Wright for 8 in Sydney on Sunday.

England's sorry tour of Australia finally ended with a whimper Sunday-a crushing 84-run defeat to give the hosts a clean sweep of the three-game Twenty20 series.
The Australians, with man-of-the-match George Bailey smashing an unbeaten 49 off 20 balls, scored 195 for six after winning the toss in Sydney.
The home side then dismissed the psychologically-scarred tourists for 111 in the 18th over to sweep the series.
It completed a disastrous 103-day tour for England, who lost the Ashes Tests 5-0 and the one-day international series 4-1, meaning Australia won 12-1 across the three formats.
In between the losses, the international careers of spinner Graeme Swann and coach Andy Flower have been ended.
The future is also uncertain for Kevin Pietersen, Matt Prior and Jonathan Trott while Alastair Cook's Test captaincy is far from certain.
"It's been good fun throughout the tour. We've been hugely disappointing, not at the races for three months, but you have to give credit to Australia," said England T20 skipper Stuart Broad.
"We've got a two-week break at home and then go to the Caribbean but we know we're a decent T20 side.
"We can now get together as a group for a decent period to work on specific things, improve and learn from this week.
"We've got a dangerous side. We've got to go to Bangladesh (for the world T20) with confidence and hopefully we can get some momentum in the Caribbean."
England, perhaps with their minds on the team's departure home in the hours after the Sydney match, surrendered limply to the Australian bowlers.
Eoin Morgan was the best of a bad lot with 34 off 20 balls as the Australian bowlers shared in the wickets.
Nathan Coulter-Nile and spinners Glenn Maxwell and James Muirhead each claimed two wickets.
Skipper Bailey earlier clubbed 26 runs off the last over to steer Australia to their insurmountable total after winning the toss at Sydney's Olympic stadium.
The Aussie skipper smacked 4-6-6-4-4-2 off Jade Dernbach's last over of the innings. In all Australia hit 13 sixes in their innings.
In his entire innings Bailey smashed three sixes and four fours in an unbroken seventh-wicket stand of 56 with wicketkeeper Matthew Wade (19 off 10 balls).
"We put in our best performance tonight. Credit to the guys," Bailey said.
"I've had a few lucky nights but we've played good cricket.Â  It will be difficult to pick a side now for the World T20 but it's a nice problem to have."
Opener Cameron White continued his strong T20 series with 41 off 37 balls, while fast bowler Ben Cutting-elevated to number four in the batting order-cracked three sixes in his 29 off 16 balls.
Recalled veteran Brad Hodge, batting in his first T20 international in six years, scored seven.
Broad was the best of England's bowlers with three for 30, including the wickets of Hodge and Dan Christian in his final over.