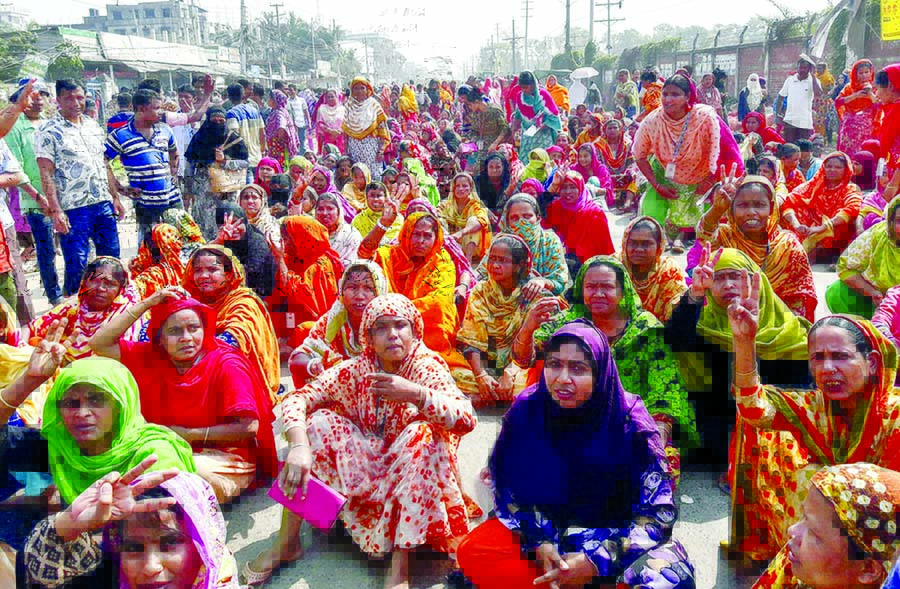 Workers from garment maker Intramex Group have blocked three roads in Gazipur city to protest the factory locking its doors and issuing a notice of closure without paying them the wages they are owed.
The demonstration has halted traffic on the Dhaka-Gazipur Road from the Chandana intersection to the Shibbari Intersection from 8 am on Thursday.
Supervisors have six months of back pay, while workers have three months of back pay, according to the company's Assistant Manager Md Abu Taslim. The factory authority had set several dates for the payments, but did not make them. In their most recent statement, the authority assured workers they would be paid by Mar 20. They failed to make the payments and instead instructed workers to show up on Thursday. But when workers came to the factory on Thursday morning the gates were closed and a notice was posted on it announcing the factory was closed indefinitely. They then began a protest.
At one point, the protest spilled onto the nearby Dhaka-Gazipur highway.
"We have not been paid since January. We are behind on rent, we owe money for groceries, the children's school fees are due. We have to bear the harangues of our creditors and face their indignities. Amidst all this one of our co-workers, Lovely, committed suicide," claimed Selina, a sewing section operator.
Gazipur Industrial Police-2 Senior ASP Md Maqbul Hossain said that they are speaking to the owners of Intramex to try and find a solution to the problem.
"The owners say that they are strapped for funds and are unable to pay. They have closed the factory because they have been unable to raise the money."
bdnews24.com attempted to contact the factory's General Manager Md Mojibur Rahman, but he did not pick up the call.