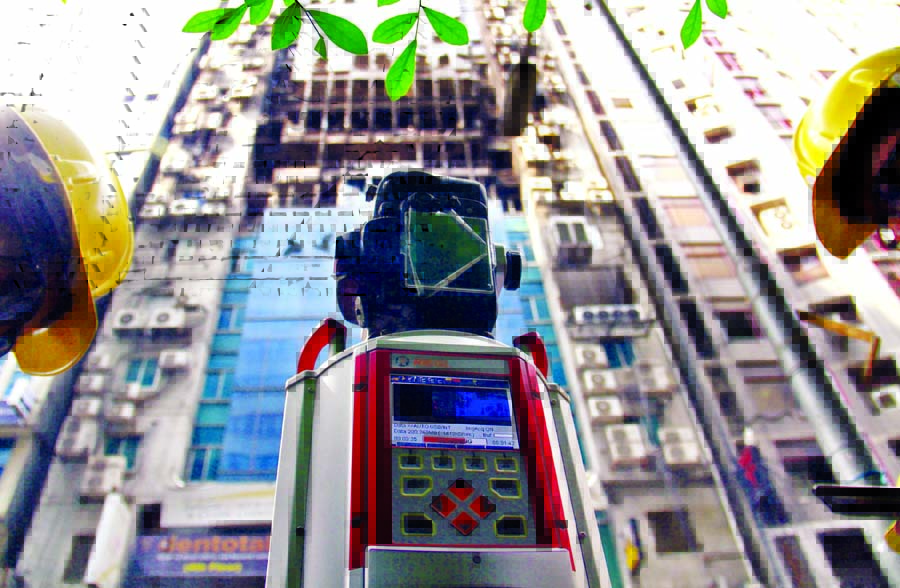 BUET investigation team scanning the present condition of FR Tower that was ravaged by the deadly fire on Sunday.

Cracks have started to emerge in the slabs and beams of Banani's fire-ravaged FR Tower leaving the high-rise in a vulnerable condition, a probe team of the Rajdhani Unnayan Kartripakkha, or RAJUK, said.
But whether the 23-floor office bloc can be used again or not will be revealed at the end of the investigation, said probe team member Prof Mehedi Ahmed Ansari of Bangladesh University of Engineering and Technology's (BUET) civil engineering department. The six-strong RAJUK probe team inspected the scene of the fire in Banani on Sunday, three days after the blaze engulfed the FR Tower.
"The building is in a vulnerable state. It will take 150 days to conduct a comprehensive investigation. We can't tell if the building can be used or not before completing the probe," Prof Ansari told reporters. At least 26 people were killed and about 50 were injured in the fire that broke out in Banani's FR Tower on Mar 28. It has since been alleged that the developers were only given permission to construct an 18-storey building but added five more floors to take the structure to 23 floors.
According to the fire service, the building also lacked adequate fire safety measures.
"As far as we can tell, the fire originated in the south-west part of the building's 8th floor before spreading to other parts. Cracks have developed in the building's slabs and beams," said Prof Ansari
"The building is in a risky state. Whether the building will last or not can only be said after 150 days of the investigation," he added.