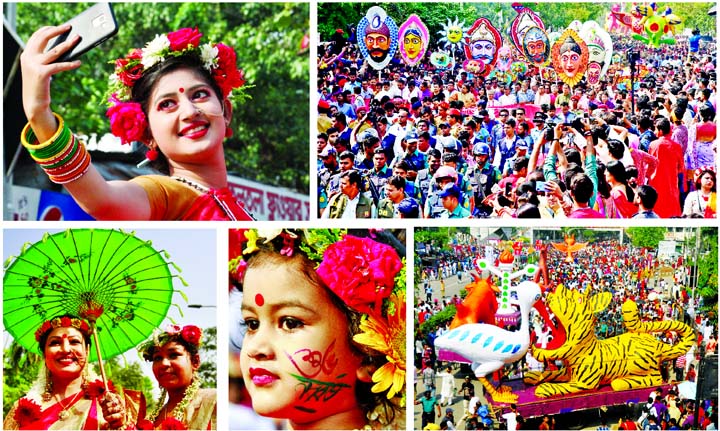 Sheikh Arif Bulbon :
The nation celebrated the Pahela Boishakh, the first day of Bengali New Year 1426 amid much enthusiasm and traditional festivity, on April 14.
To mark the day, thousands of men, women and children thronged the streets and different places in the capital and elsewhere across the country. Cultural and musical groups started off the first day of the Bengali year with songs and other performances at city parks while students of the Faculty of Fine Arts of University of Dhaka University and hundreds of youngsters brought out a Mongol Shobhajatra, a procession of good wishes, in the morning as part of the carnival.
The day broke with the singing of Esho Hey Boishakh, Esho Esho everywhere in Bangladesh gave the day really a festive dimension.
Men in traditional pyjama and punjabi, and women in white and red saris, joined the celebrations along with children in colourful attires, streaming through Dhaka streets as the first light of the sun rang in Bengali New Year.
The people gorged themselves on Bangla delicacies of Panta Bhat (rice soaked in water) and fried Hilsa and chilli at home and places of Boishakhi congregations, the major ones being in the capitalâs Ramna Batamul and on Dhaka University campus.
National dailies have brought colourful supplements while state-run Bangladesh Television (BTV) and Bangladesh Betar and private TV channels and radio stations aired special programmes while festive mood gripped all the cities and towns with different programmes of cultural groups.
President Abdul Hamid and Prime Minister Sheikh Hasina in separate messages greeted the countrymen on the occasion of Pahela Boishakh.
They wished peace, happiness and prosperity of the people and the country in the new Bengali year 1426.
The Ministry of Cultural Affairs, Bangla Academy, Shilpakala Academy, Sammilita Sangskritik Jote, Bangabandhu Sangskritik Jote, Bangladesh Shishu Academy, Jatiya Press Club, Dhaka Reportersâ Unity (DRU) and different organisations celebrated the day with festivity.
Besides, Pahela Boishakh are also being celebrated in Chattogram, Khulna, Rajshahi, Sylhet, Barishal, Rangpur, Faridpur, Madaripur, Gopalganj, Shariatpur, Mymensingh, Habiganj, Magura, Narayanganj, Munshiganj, Rangamati, Bagerhat, Kurigram, Kushtia, Joypurhat and other districts. The day was a public holiday.
According to historical records, celebrations of Pahela Boishakh, the first day of the Bangla Calendar Year, started from Emperor Akbarâs reign when it was customary to clear all dues on the last day of the Bengali month of Chaitra with businessmen opening Halkhata or ânew bookâ of accounts in their shops.