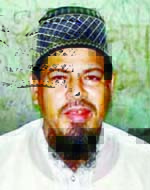 SM Siraj-ud-Daula, Principal of Sonagazi madrasa in Feni has confessed to ordering the fatal arson attack on student Nusrat Jahan Rafi for her refusal to drop sexual abuse charges against him, police say.
He gave the orders to his students and associates Nur Uddin and Shahadat Hossain Shamim from jail, police said, citing Siraj's confessional statement given in a Feni court on Sunday.Â  Â
"He ordered them to burn her to death if she did not agree to withdraw the case against Siraj. He asked them to stage the murder as a case of suicide," Special Superintendent of Police Md Iqbal said.
The Police Bureau of Investigation officer spoke to the media after the court finished recording Siraj's statement for five hours.