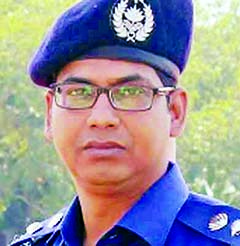 Staff Reporter :
SM Jahangir Alam, Superintendent of Police (SP) of Feni has been withdrawn on charge ofÂ  neglectingÂ  duty in connection with the murder of Feni madrasa student Nusrat Jahan Rafi.
The Ministry of Home Affairs on Sunday took the decision and issued a notification in this regard, said Sohel Rana, Assistant Inspector General (Media and PR) at the Police Headquarters.
Jahangir Alam has already been attached with the Police Headquarters, the AIG said.
The development arose after the committee formed by the PHQ to probe the murder ofÂ  Nusrat submitted a set of recommendations on April 30, he said.
They are facing the actions on charges of violating departmental discipline, tarnishing the image of the police and behaving inappropriately, according to him.
On Friday,Â  Sonagazi Police Station's Sub-Inspector (SI) Md Yusuf and SI Iqbal AhammedÂ  had been suspended for the reasons of neglecting duty. They have been attached with the DIG office of Khulna range and the Khagrachari Hill Tract district office respectively, he said.
Earlier, former OC of Sonagazi Police Moazzem Hossain has been suspended and attached to the office of deputy inspector general (DIG) of Rangpur range as per committee's recommendation, said AIG Sohel.
Jahangir Alam and some other cops officials likely to face more disciplinary actions on account of their non professional activites, Home Ministry sources said.Â  Disciplinary action against the SP is underway at the Home Ministry, they said.
The committee formed by the PHQ to probe the murder found that the OC and two other policemen, and the police superintendent if Feni, did their duties negligently.
The probe committee included Deputy Inspector General SM Ruhul Amin and Additional SP Mohammad Abu Suffiun of the PHQ.
The committee recommended suspension of OC Moazzem and Sub-inspector Iqbal and transfer of SP SM Jahangir Alam and Sub-inspector Abu Yousuf. It also suggested departmental proceedings against all of them.
On April 6, Nusrat, a student of Sonagazi Islamia Fazil Madrasa in, was set ablaze allegedly for refusing to withdraw sexual abuse charges filed against Principal Siraj Ud Doula.
After battling with critical burn injuries for five days, the 18-year-old unfortunate girlÂ  breathed her last at Dhaka Medical College Hospital on April 10.
Most of the suspects are now behind the bars.