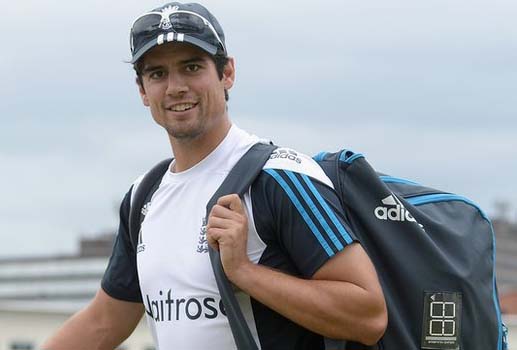 Former England captain Michael Vaughan has admitted he was wrong to say Alastair Cook should be replaced as skipper of the national side.
Vaughan called for Cook to be replaced by Eoin Morgan after defeat by India in the second Test at Lord's last month.
But he acknowledged back-to-back Test wins since showed it was a "fantastic decision" to retain the 29-year-old.
"No question, I was wrong," said Vaughan on BBC Radio 5 live's the Tuffers and Vaughan Cricket Show.
"Two and a half weeks ago, I said a break would've done him good.
"But the England and Wales Cricket Board stood by him, he was strong and said: 'I'm the man to carry this young team forward.'"
England went 10 Tests without a win before securing a 266-run victory in the third Test of the five-match series with India, in Southampton.
That was followed by a crushing innings victory inside three days at Old Trafford last week, which gave England a 2-1 lead ahead of the final Test at The Oval, which starts on Friday.
Cook is without a Test century since May 2013, but ended a run of poor form with scores of 95 and 70 at the Rose Bowl.
And Ashes winner Vaughan, who captained England between 2003 and 2008, believes the first day of the Test in Southampton may well have been a turning point for Cook.
He said: "He got off to a great start by winning the toss, batted first and he went out there and played brilliantly to score 95.
"There was a bit of fortune when he was dropped by Ravindra Jadeja at third slip on 15 - and I think that one catch is the real twist of the whole series.
"If Jadeja had caught Cook on 15, I really felt at that time, it would've been a disaster for the side."
Vaughan's comments came on the day centuries from Ravi Bopara and captain James Taylor saw England Lions to a seven-wicket win over Sri Lanka AÂ  in their triangular one-day series.
Essex all-rounder Bopara, who hit 106 in Worcester, said the likes of Lions wicketkeeper/batsman Jonny Bairstow and batsmen Alex Hales, James Vince and Jason Roy could force their way into the England squad for next year's one-day World Cup.
"I've always been impressed with Alex Hales," said Bopara, 29. "He's a brilliant batsman.
"Every player in that top six has a chance of being in the World Cup squad. Those players can dominate an attack."