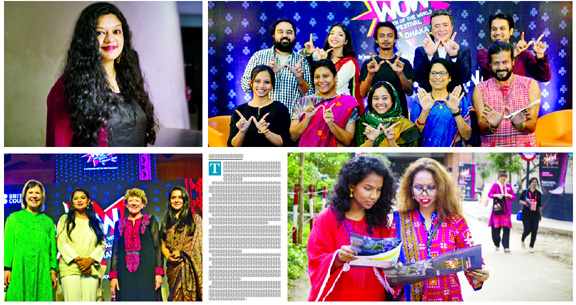 Sheikh Arif Bulbon :
he Women of the World (WOW) festival was held on the premises of Bangla Academy in the capital with a view to advancing the gender equality in Bangladesh.
The British Council and the WOW Foundation, UK organized the two-day event titled âWOW Dhaka Festival 2019âÂ  for the first time in Bangladesh.
While talking about arranging the festival Deputy Director of the British Council Andrew Newton said, âThe WOW festival is a crucial platform in advancing our work on women and girlâs empowerment under our arts programme portfolio in South Asia.â
The WOW Dhaka festival included cross-cultural dialogue, panel discussion, workshops, film screening and a full-fledged theatre production.
Nahin Idris, Head of Arts, British Council, said that their plan is to reach more than 1 million people through a âspirited and far reaching celebration of the women and girlsâ achievements, and by encouraging sharing of hundreds of womenâs stories to explore the obstacles that prevent them from achieving their full potential.
Noted actress Sara Zaker, who is one of the curators of the festival, was also present at the festival.
WOW is the largest Womenâs festival in the world. The festival was started in London in 2010, which is now a global festival expanding across five countries. Over one and a half million women are part of the WOW movement.
It is an international festival that celebrates the achievement of women and girls. WOW also focuses on sharing experiences and approaches to tackle ongoing inequalities and discriminations faced by the women in the society. n