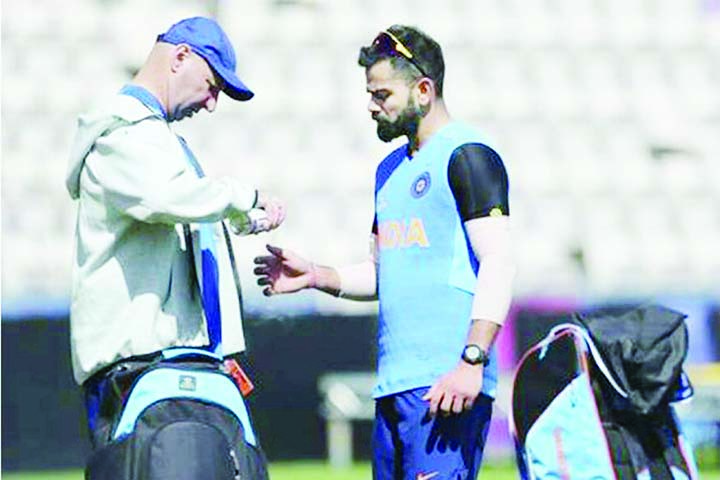 India have been quietly preparing for their ICC World Cup 2019 campaign to get underway, away from prying eyes in Southampton - where they will face South Africa in their opening fixture on Wednesday.
There was a minor scare during Saturday morning's practice session at the Ageas Bowl when skipper Virat Kohli was hit on the thumb during a fielding session, but he was cleared off any injury.
Physiotherapist Patrick Farhart taped Kohli's thumb up and the Indian captain took part in the rest if the session without pain, batting and fielding with ease. At the end of the training session, Kohli was seen walking off with his thumb dipped in a glass full of ice.
India would also be encouraged by the progress of Kedar Jadhav's recovery from an injury to his left shoulder. Jadhav had missed out on both of India's warm-up games, against New Zealand and Bangladesh, but batted at the nets on Saturday without discomfort.
Earlier, all-rounder Vijay Shankar also injured his forearm in the first practice session at the Oval last week. Vijay was forced to miss the first warm-up game against New Zealand but recovered to take part in the second warm-up tie.
Apart from these two, one of the standbys Navdeep Saini - who was also picked as one of the four net bowlers to assist in India's training - has also failed to travel to England and is nursing a side strain.