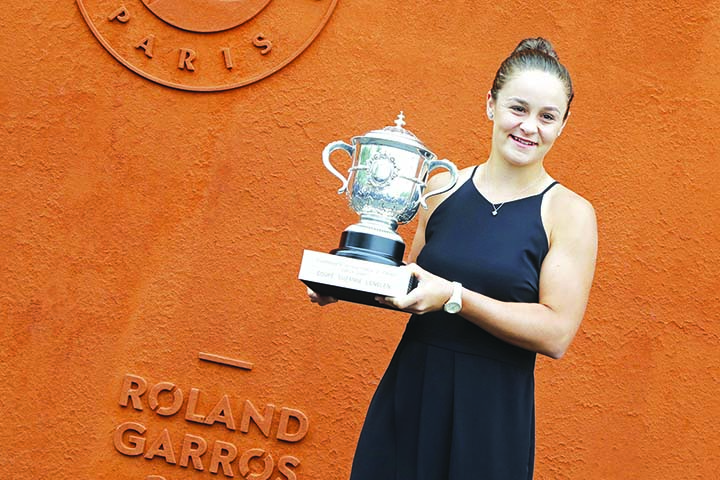 Australia\'s Ashleigh Barty poses with the trophy during a photo call at the Roland Garros stadium in Paris on Sunday. Barty won the French Open tennis tournament women\'s final on Saturday.

Australia hailed "bloody legend" Ashleigh Barty on Sunday after she ended the country's 46-year wait for a French Open singles title with a crushing victory in Paris.
Some of the nation's top sportspeople took to social media to congratulate the 23-year-old in the wake of her 6-1, 6-3 whipping of Czech teenager Marketa Vondrousova which propelled her to number two in the world.
"YES YOU DID! Congrats @ashbar96," tweeted Australian superstar footballer Sam Kerr as the Matildas prepared to open their World Cup campaign in France later Sunday.
Wallabies veteran Adam Ashley-Cooper, who has been tweeting his support for Barty throughout the tournament, also offered congratulations.
"YES!!!!! Allez Barty! You bloody legend. Congratulations @ashbar96," he said.
The new queen of clay joined Australian legends Margaret Court, Evonne Goolagong Cawley and Lesley Bowrey on the Roland Garros honour roll.
Her achievement also made her the first Aussie woman to win a Grand Slam since Samantha Stosur at the US Open in 2011.
Stosur, a close friend of Barty's, took to Instagram to hail her Fed Cup teammate.
"Massive CONGRATULATIONS to @ashbar96 on your incredible win today!" she said.
"So happy and proud of you!! Always knew you would achieve this incredible success! You have such a gift and determination and now the trophy to show for it all!!"
Barty, who famously took a break from tennis late in 2014 to play professional cricket, quickly took advantage of Vondrousova's nerves to take a stranglehold on the final and told the crowd afterwards: "I played the perfect match today."
Australian coach Darren Cahill, who helped steer former world number one Simona Halep to the French Open title last year, said the whole nation was proud of what Barty had achieved, and how she went about it.
"So so bloody good, Ashleigh Barty. We Aussies are all so damn proud of her and what's she's done for Aussie tennis," he said on Twitter.
"And more importantly, the way she's gone about it. A real down to earth young lady."
Barty even won support from Hollywood with Australian star Russell Crowe saying: "Ash Barty. Fantastic."
The nation's media also jumped on the bandwagon with the Sydney Morning Herald saying it was "a deserved reward for an immensely likable player", adding that she now had "the world at her feet".
With Australia more used to the antics of Nick Kyrgios and Bernard Tomic, Sydney's Daily Telegraph noted: "You can be nice and still play killer tennis."