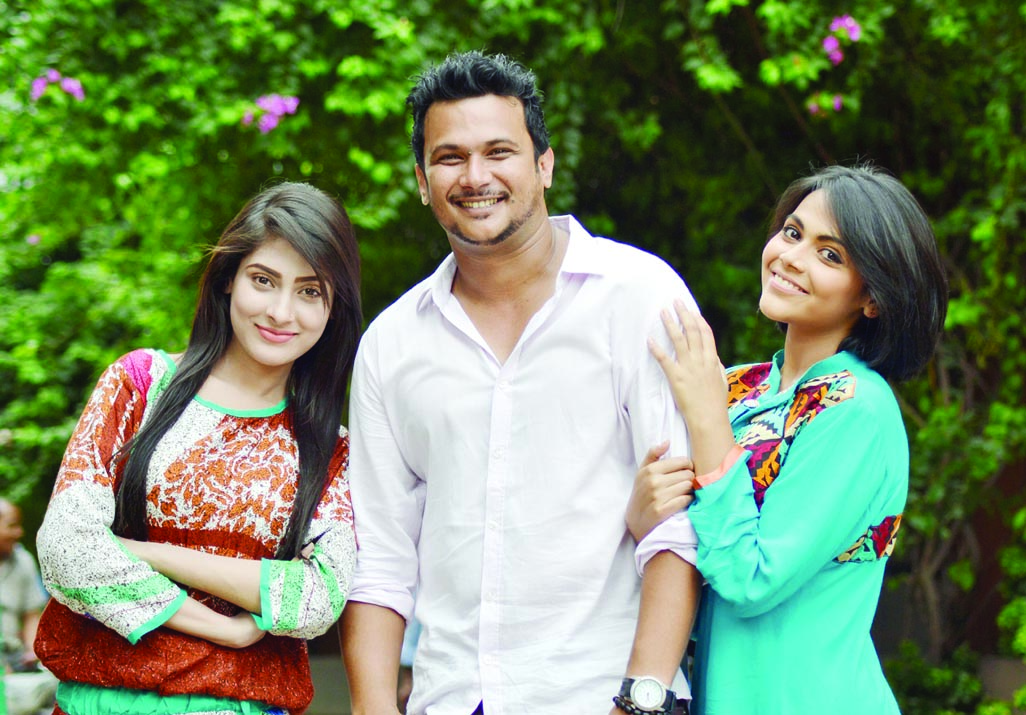 As a pair, Naim and Mehazabien have performed together in many plays. Lux star Samia has dreamt to act against Naim from many days. Promising play director Kamrul Haque Sarkar extended his hands to fulfil Samiaâs dream.
Under Kamrulâs direction and a script written by Shaila Sultana Mira Samia got the opportunity to act against Naim in a play titled Aprokashito Anubhuti. Naim and Mehazabien is main pair in the play.
In the story of the play, it will be seen that Kabbyo (Naim) and Misti (Mehazabien) are close friends in the university. They are also classmates. They do not have any scope to make a relation between them. Another classmate of Kabbyo-Misti, Samia loves someone. She shares her love story to Kabbyo. Then he starts to see dream with Misti. Story of the play continues.
While talking about the play Mehazabien told this correspondent, âI always feel comfortable and also like to work against Naim. Therefore, story of the play was exceptional so that I have agreed to act in the play. I think viewers will also enjoy it to watch.â
Naim shared his feelings by this way, âMy works against Mehazabien are always become popular to the viewers. I am confident this play will also become popular. I have worked with Samia for first time. She is very cooperative actress.â
âI am fan of Naim bhai. My dream came true to work with him in this play. I have enjoyed a lot working in the play,â Samia said this while sharing her feelings in this regard.
The play Aprokashito Anubhuti will go on air on Banglavision soon, said its director Kamrul.
It may be mentioned that Naim and Mehazabien last performed together as a pair in a play titled 10-e August under the direction of Mehedi Hasan Joni in last Eid.
Meanwhile, Mehazabienâs acting in plays - U-Turn, Ekti Prem-er Golpo and Common Dialogue - were positively accepted to the viewers in Eid.
After Eid-ul-Fitr, she has finished shooting of a play titled Mon Badha Maney Na under the direction of Mizanur Rahman against Sajal.
On the other hand, after Eid Naim acted against Aparna in a play titled Jol Ronger Golpo under Setu Arifâs direction. He is also acting regularly in Redoan Roniâs ongoing serial Poribar Kori Kolpona. Sujana is his co-actress in the serial.
However, Aprokashito Anubhuti is first work of Samia after Eid.Â