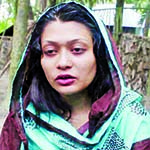 The woman who tried to save her husband from attackers wielding long, sharp weapons in Barguna has recounted the horror she underwent during the fatal attack.
"I tried hard, but I could not stop them," Ayesha Siddiqua Minni told reporters at her home in Police Lines area of the town on Thursday.
She said the lead assailant, Nayan Bond, had sexually harassed her at different times.
Among the other assailants, she could recognise Rifat Farazi and Nishan Farazi. They launched the attack when the couple were returning home from Barguna Government College, of which Ayesha is a first-year undergraduate student, on Wednesday morning.
Ayesha's husband Rifat Sharif died from excessive bleeding from a number of wounds in the afternoon, according to doctor Jamil Hossain who conducted the post-mortem examination at the Barishal Medical College Hospital.
Â "Some boys started beating Rifat up when we were returning home from the college. I tried to stop them but could not. Later, Nayan Bond, Rifat Farazi and Rishan Farazi started hacking him," Ayesha said.Â Â Â Â Â Â Â Â Â Â Â Â Â  Â
"I desperately tried, grabbed the weapons, cried for help, but not a single person came to the rescue," she added.