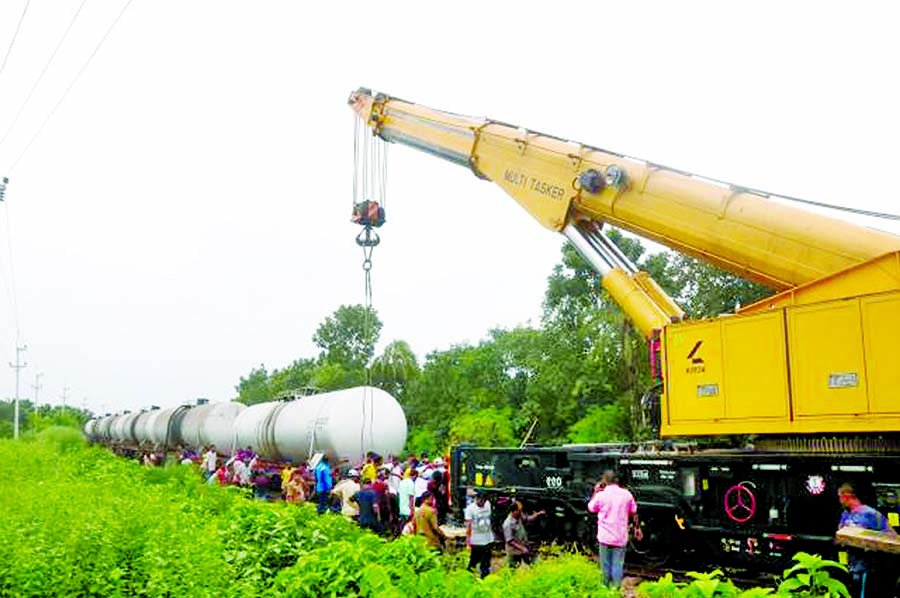 The railway authorities have attributed the derailment of nine oil carriages in Rajshahi to negligent repair work on the tracks.
According to a railway official, the spikes that nailed down the slippers under the rail line were removed during the repairs which led to the accident on Wednesday evening.
All train services to and from Rajshahi were cancelled after the crash but are set to resume on Thursday evening.
According to a railway official, a few slippers on the track were left loose after the spikes used to nail it down were removed during the repairs, leading to the accident on Wednesday evening.
The authorities suspended Bangladesh Railway (West) Assistant Executive Engineer Abdur Rashid in the aftermath of the derailment.
A three-strong probe committee headed by Departmental Transport Officer Abdullah Al Mamun was formed to look into the incident and report back within 72 hours.
All train services to and from Rajshahi were cancelled following the accident at Charghat Upazila but are expected to resume on Thursday evening after the track is mended.
The train from Ishwardi Railway Junction in Pabna was bound for Rahanpur in Chanpainawabganj. The oil carriages went off the track after the train travelled about a kilometre from Sarada Station towards Rajshahi, the station master said.
"We have initially found that the track was undergoing repairs when the accident took place," said Bangladesh Railway General Manager (West) Shahidul Islam.
"The old slippers had been changed but those who were conducting the work had removed a few pins (dog spikes) that are used to attach the slippers to the track without putting it back on," he added.
"But the loose slippers were later covered by stones laid on the track and so the matter did not catch their eye. The accident occurred because of this."
Meanwhile, the authorities recovered four of the nine derailed carriages until 12 pm on Thursday.
A relief train from Ishwardi is being used to remove the other carriages amidst bad weather, railway officials said.
"It will take time to complete the recovery operation. We expect the Padma Express, scheduled to leave Rajshahi for Dhaka at 4pm, will be able to run on time once the track is mended," Rajshahi Railway Station Master Jahidul Islam told bdnews24.com.
Two night trains from Rajshahi were cancelled after the accident, said the station master.
Other train services, including the intercity Banalata Express, Silk City Express on the Dhaka route, Sagardari Express and Kapotakkha Express in Khulna route, Neelphamari-bound Titumir Express, Rajbari-bound Rupsa Express, and a few local trains were suspended on Thursday morning.