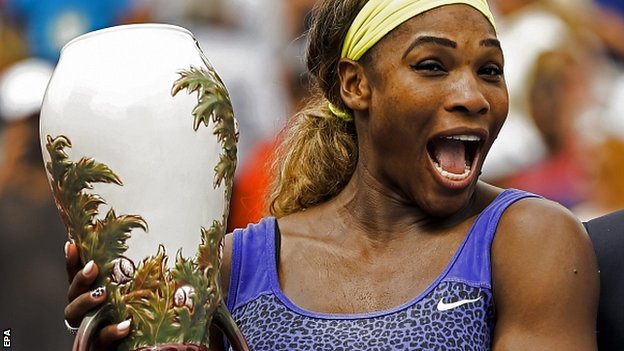 World number one Serena Williams won her first Cincinnati title with a straight-sets victory over Ana Ivanovic at the Western & Southern Open.
The 32-year-old American fell behind early on but recovered to win 6-4 6-1 in 62 minutes.
It is her first victory at the event in six attempts since 2006.
Williams has now won 62 WTA titles and five in 2014, and she will try for a sixth US Open win when the final Grand Slam of the year begins on 25 August.
There will be Â£2.4m (US$4m) on offer for Williams should she win the title in New York, having already sealed the Â£600,000 (US$1m) bonus for winning the US Open series as the best player across the US summer hard-court season.
"It's just amazing to finally win here," said Williams. "It was such a great week. She was playing so hard, hitting so many winners."
She made a slow start to Sunday's final, just as she had 24 hours earlier in the semi-final against Carolina Wozniacki, but again the 17-time Grand Slam champion wrestled control from her opponent.
Ivanovic, seeded 12th, started confidently off the back of a landmark win over Maria Sharapova in the semis but she could not convert a point for a double-break at 3-1.
Williams slammed the door shut with a big serve and never looked back, taking the set after two consecutive double faults from Ivanovic and rolling through the second set.
It was the American's third win in four matches against Ivanovic this year, with the Serb having won their contest at the Australian Open in January.
"It's been a great week for me in Cincinnati," said Ivanovic. "I really want to congratulate Serena. I think I got a lesson on how to serve today. Maybe after you retire you can give me some tips!"