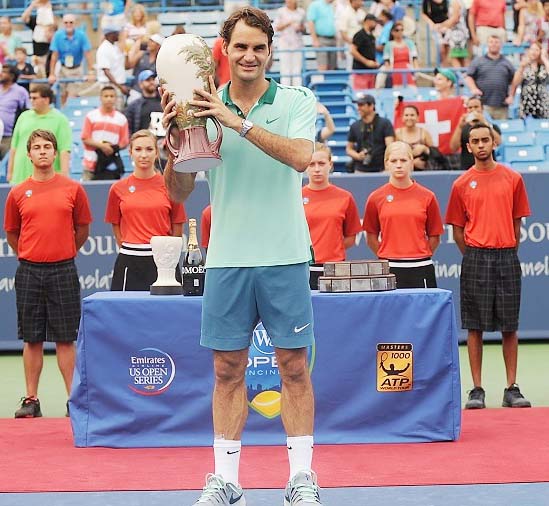 Roger Federer poses with the trophy after beating David Ferrer of Spain at the Cincinnati Masters on Sunday.

World number three Roger Federer won his sixth Cincinnati title with a hard-fought three-sets victory over David Ferrer at the Western & Southern Open on Sunday.
The 33-year-old Swiss won 6-3 1-6 6-2 and has now beaten the 32-year-old Spaniard in all 16 of their matches.
But he was made to work by Ferrer, who was close to handing him his first love set since the 2008 French Open final.
"I've played some good tennis here over the years, so it's really nice to come back and win it again," Federer said.
"The whole tournament was really good for me."
It was the former world number one's first Masters title since 2012, when he also won in Cincinnati.
However, Federer admitted that he had considered not playing in the event after losing in the final in Toronto against Jo-Wilfried Tsonga a week earlier.
"I had to try to back up a tough week from last week, I didn't think it was possible," he said. "I was considering not playing.
"But in practise I felt like I was recovering quickly so I gave it to a go. I played with less pressure."
Federer first broke his opponent eight games into the match and saved four break points on his own serve to take the set 6-3.
World number six Ferrer struggled to hold serve in the first game of the second set - saving five break points - but then stunned the Swiss with a triple break to take the set 6-1.
The third set went with serve until Federer broke in the fourth game to regain momentum at 3-1 up and the 17-time Grand Slam champion took control from there on in to claim his 80th career title.