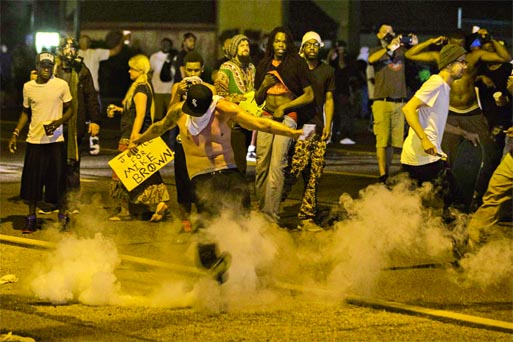 A protester kicks a tear gas canister back towards police after protests in reaction to the shooting of Michael Brown turned violent near Ferguson, Missouri on Sunday night. Internet Photo

The US state of Missouri is sending the National Guard to the town of Ferguson as protests escalate over the police shooting of an unarmed black teenager.Governor Jay Nixon signed an order to "help restore peace and order".Police managed to disperse angry crowds shortly before a second night under curfew began on Sunday.The mother of Michael Brown has called for the arrest of the officer who killed her son on 9 August. He has been suspended pending a full investigation.Officials last week confirmed that Darren Wilson, a six-year police veteran with no previous complaints against him, has been on paid administrative leave since the shooting. In an interview with US media, Mr Brown's mother said the only way to restore peace in Ferguson was by "arresting [Mr Wilson] and making him accountable for his actions".A midnight curfew was imposed for the second night in the tense St. Louis suburb hit by racially charged demonstrations, violence and looting.At around dusk on Sunday, hundreds of protesters in Ferguson including families with young children fled to safety after police wearing gas masks and body armor fired tear gas and smoke canisters to scatter them hours ahead of the curfew.Earlier, police in Ferguson, a suburb of St Louis, said they came under attack and had "no alternative" but to respond. Capt Ron Johnson said protesters had shot at officers and thrown petrol bombs and bottles before the five-hour curfew started at midnight local time (05:00 GMT).He described the violence as "premeditated criminal acts" to provoke a reaction. A number of people were injured during the unrest, and police made several arrests.No major incidents were reported during the curfew, which has now ended. Missouri declared a state of emergency and imposed a curfew on Saturday in response to the escalating violence.The killing of Brown by a white policeman in a street has inflamed racial tensions in the largely black suburb. Officer Darren Wilson shot the teenager after reportedly stopping him for walking in the street, disrupting traffic.The governor of Missouri has criticised police for releasing CCTV footage which apparently shows Brown stealing some hours before his death. Nixon said the release of the footage "appeared to cast aspersions" on the dead man, saying "it made emotions raw".But he also condemned the protesters: "These violent acts are a disservice to the family of Michael Brown and his memory and to the people of this community who yearn for justice to be served and to feel safe in their own homes."A preliminary post-mortem examination by the St Louis County Medical Examiner's office on the day after Mr Brown's death found he had been shot, police said, without disclosing how many times.But a preliminary private post-mortem report has since revealed that he was shot at least six times, including twice in the head, the New York Times reports.The bullets did not appear to have been fired from very close range due to the lack of gunpowder on the victim's body, forensic pathologist Michael Baden was quoted by the paper as saying.