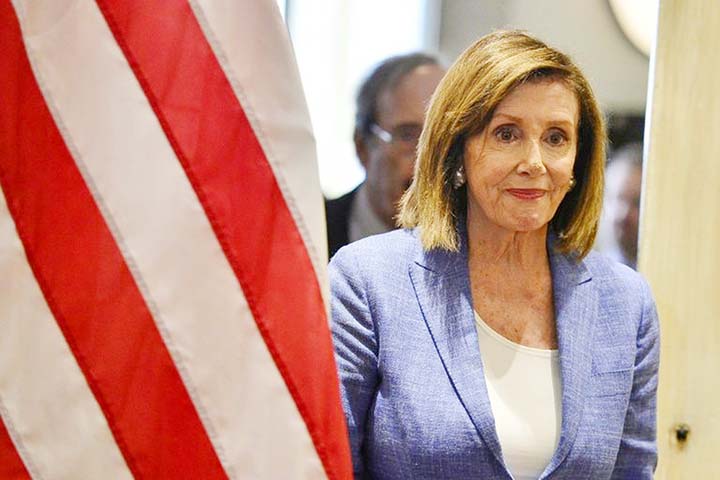 US Speaker of the House Nancy Pelosi is insisting that Brexit must not jeopardize the Northern Ireland peace accord.

The top Democrat in the US Congress warned Wednesday that lawmakers would block a trade pact with Britain if its exit from the EU undermines Northern Ireland's peace accord.
President Donald Trump and senior advisors to Britain's new Prime Minister Boris Johnson have spoken of fast-tracking a trade deal once Brexit is complete. Vice President Mike Pence travels to Britain and Ireland next month to discuss expanding commerce.
But any such agreement would need the green light from Congress, and House Speaker Nancy Pelosi-Trump's political nemesis on Capitol Hill-made clear she would not play ball if the Irish peace deal were put at risk.
The island of Ireland is divided into Northern Ireland-part of the United Kingdom that is thus set to leave the European Union-and the neighboring Republic of Ireland, a separate EU member state.
Reimposing controls along their shared border if Britain leaves without a deal-a so-called "hard Brexit"-would put the 1998 peace accord in jeopardy.
"Whatever form it takes, Brexit cannot be allowed to imperil the Good Friday Agreement, including the seamless border between the Irish Republic and Northern Ireland," Pelosi said in a statement.
"If Brexit undermines the Good Friday accord, there will be no chance of a US-UK trade agreement passing the Congress."
The 1998 Good Friday Agreement brought the 30-year Northern Ireland conflict to an end. But how to handle the province has emerged as a core issue for Brexit negotiators.
Critics have warned that Brexit might require reimposing a hard border on the island, a move that would essentially upend the agreement that has kept peace for the past two decades.
Goods and people move freely between countries and the withdrawal agreement negotiated last year between London and Brussels contains a "backstop" plan to maintain this situation, whatever happens with Brexit.
However, British MPs have rejected it three times and Johnson warns the backstop must go or Britain will leave the EU on October 31 without any deal.
Pelosi, a master legislator, strongly signaled that Republicans would join her Democrats in opposing a trade pact if Brexit undermines a peace deal "treasured" by the American people.
The Republican co-chair of the Friends of Ireland group in the US Congress, Pete King, reportedly said jeopardizing the open border was a "needless provocation" over which his party would have no hesitation defying Trump.
Those in Congress with a strong belief in Northern Ireland and the Good Friday agreement "would certainly be willing to go against the president," King told The Guardian.
After his first phone call with the new British leader late last month, Trump said talks on a "very substantial" post-Brexit trade deal were already underway.
Last week Johnson dispatched top aides including Foreign Secretary Dominic Raab to Washington in a bid to fast-track the negotiations.
And on Monday US National Security Advisor John Bolton, a hawkish Trump aide, said Washington wanted to "move very quickly" on the trade pact after Britain exits the EU.
Pence is scheduled to visit Britain on September 4-5.
He travels to Ireland a day later to voice US commitment to "upholding the Good Friday Agreement, expanding bilateral trade and investment, and strengthening the economic relationship between our two countries," according to the White House.
Any US trade deal needs final approval from the US Congress, where dozens of US lawmakers claim Irish ancestry and political power is split: Pelosi's Democrats control the House of Representatives, while the Senate is led by Republicans.