Golden Triangle attractions that are a must-visit 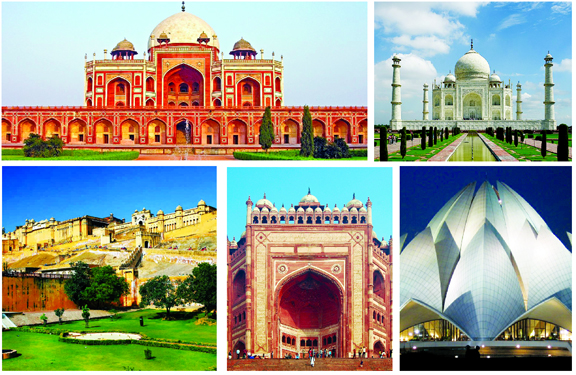 Weekend Plus Desk :
Humayunâs Tomb, Delhi
Indiaâs Golden Triangle is aptly named so, for the sights that lie on this stretch are nothing less than fascinating. The triangle covers the cities of Delhi and NCR, Agra, and Jaipur; also covering the other stunning sights of Rajasthan. Try spotting the three cities on a map of India, and you will have the shape of a triangle; thus, the name.
You can pretty well start your tour of Golden Triangle attractions from Humayun's Tomb in Delhi. A favourite with Instagrammers, it is a UNESCO World Heritage Site and defines the capital as one great love of the Mughals.
Lotus Temple, Delhi
Delhiâs Lotus Temple is one of the most beautiful sights in the city, especially if you have an eye for architecture. The temple is shaped like a lotus temple, is a BahÃ¡âÃ­ House of Worship, and makes for sensational Instagram photos.
India Gate, Delhi
India Gate can be rightly called as Delhi's Arc-de-Triomphe, and is a war memorial in the heart of the Indian capital. The surrounding area has landscaped gardens and is a bustling picnic spot as well. A late evening stroll here is a good option, for you will get a chance to hobnob with the locals as well.
Jama Masjid, Delhi
One of the largest mosques in India, Jama Masjid will take you to the much famous lanes of Old Delhi. A photographerâs fantasy, this mosque was built by the Mughal emperor, Shah Jahan, in 1644.
Taj Mahal, Agra
Well, this one needs no introduction or description. India's claim in the Seven Wonders of the World, it is a mammoth structure that will take your heart away. You need to see it to believe us.
Fathepur Sikri, Agra
While Taj Mahal basks in the glory of all attention in Agra, you really cannot skip Fatehpur Sikri as well. It sees lesser tourists and thus makes for a perfect photographersâ muse. Extremely well-crafted, it is an awe-inducing piece of architecture. Do not skip.
City Palace, Jaipur
As you touch Jaipur in your Golden Triangle route, it is imperative that you visit the City Palace as well. It is an essential for those into history and stories, for it houses a very impressive collection of curios, photographers, paintings and more from Jaipur's golden age. What adds more lure to the place is the fact that it was once home to the royals of Rajasthan.
Jal Mahal, Jaipur
This place looks more like a painting, set between the shimmering waters of Man Sagar Lake. It is spread over five floors, with four of those underwater! It lies on the road to Amber from the city centre, and you can visit it enroute. While you cannot get across the lake to reach it, a look at it in the evening under a full moon is the stuff that dreams are made of.
Hawa Mahal, Jaipur
This is probably the most photographed of all the sites of Jaipur. It is a very interestingly made structure, carved out of red and pink sandstone, and justifying Jaipur's name as the Pink City. It is quite close to the City Palace, and both can be visited in one go. Much like the rest of Rajasthan, this one also deserves to be captured on camera.
Amber Fort, Jaipur
It would not be incorrect to write of Amber Fort as one of the grandest forts in Rajasthan. A mammoth structure, it is very well-kept and sees throngs of visitors all day. It is set in the Aravallis, and was built by Raja Man Singh in 1592. Once in, you can bask in the glory and experience the opulence that the royal family must have lived in during its ruling days. n