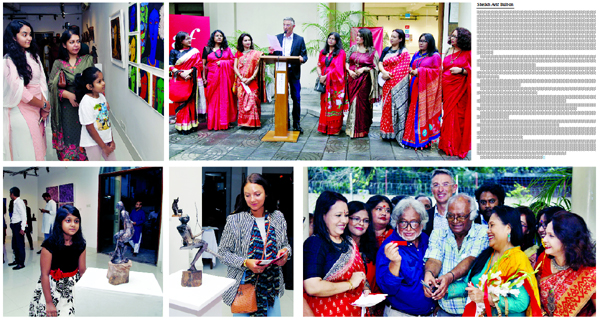 Sheikh Arif Bulbon :
âSpending a significant time of our lives at the same alma mater (Faculty of Fine Arts, University of Dhaka) and graduating the same year made us become the best of friends, and also familiar with our artistic expressions. During the later years, after life took us over, we started discussing the journey that we never took. That is when this exhibition, which since has become an annual event, took root. We have been hosting Colours annually for the past four years. These exhibitions are aimed at celebrating our journey and growth together. We showcase our works annually to consistently evolve and create dialogue about our practices,â this was said by the participant artists of a group art exhibition titled Colours which is being held atÂ  the La Galerie of the Alliance FranÃ§aise de Dhaka (AFD) in the capitalâs Dhanmondi area now.
Eminent architect and poet Rabiul Hossain attended the inaugural ceremony of the exhibition as the chief guest while eminent artist Kanak Chapa Chakma also attended the event as the special guest.
The participating artists are: Farhana Afroz, Farzana Islam, Monidipa Dasgupta, Mukti Bhowmik, Rebeka Sultana, Monira Sultana, Rehana Yesmin, Rifat Jahan and Shaila Akhter.
Farhana Afrozâs subject ranged from humors to day to day experiences which left a mark on her conscious.
The sculptures of Farzana Islam express the lives of the people around her, the old building and the presence of nature.
Monidipa Dasgupta, a passionate artist with a strong urge to discover and design ways to recreate urban lifestyle through her artwork.
Mukti Bhowmik tries to portray her forgotten desires through her work. Her works are very much influence by childhood memories and nature.
Monira Sultana loves nature very much. She portrays on her canvas the surrounding of nature. Â
The subject of Rebeka Sultanaâs work is the representation of women as well as the nature in different colors through different designs.
Rehena Yesmin makes an effort to illuminate the intangible and abstract beauty of the incorruptible soul, often eclipsed by the struggles, controversies and clashes of the reality of modern times.
Frida Kahloâs (a famous Mexican painter) power of portraying pathos and emotions of womanhood touches Refat Jahan deeply and thus it becomes the subject of her painting. The new series of paintings by Shaila Akhter accelerated with thought provoking sojourn of women empowerment and freedom.Â  Â
The exhibition will continue till August 31. n