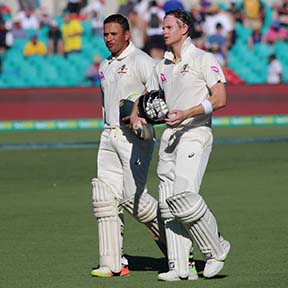 Australia on Tuesday dropped struggling batsman Usman Khawaja for the fourth Ashes Test against England at Old Trafford, making way for Steve Smith's return.
Selectors named a 12-man squad for the Test beginning Wednesday, with David Warner and Marcus Harris as openers but leaving out Khawaja, who has averaged just 20.33 in six innings in the series batting at number three.
Leading batsman Smith, who suffered concussion after being hit on the head by Jofra Archer in the second Test at Lord's, returns after sitting out last week's agonising loss at Headingley which levelled the five-match series 1-1 with two Tests to play.
Smith has scored 378 runs at an average of 126 in three innings in the series and was back on the field in last week's tour match against Derbyshire.
The 32-year-old Khawaja scored 72 opening the batting against Derbyshire, but it was not enough to convince selectors to keep him in the side.
Harris has been retained after making eight and 19 at Headingley in his first Ashes Test then scoring 64 against Derbyshire before he was run out in a mix-up with Khawaja.
Coach Justin Langer told reporters in Manchester that he was "very clear on the 12, not so sure on the 11", with the decision coming down to the bowling line-up.
Pace bowler James Pattinson has also been left out, leaving fast bowlers Pat Cummins, Josh Hazlewood, Mitchell Starc and Peter Siddle to compete for three places.
Langer said losing at Headingley by one wicket after bowling out England for 67 in the first innings was a "really tough loss" for the team, but their preparations for the upcoming game had been solid.
"We felt like we got the Ashes stolen the other day," he said of England's successful chase of their record 359 target. "To England's great credit, that's what they did - they won that Test match.
"Now we've got to work out what we're going to do - we're going to use that as fire, we're not going to feel sorry for ourselves."